Rescuing a ruin on Henrietta Street: ‘The bank just didn’t want to know’ 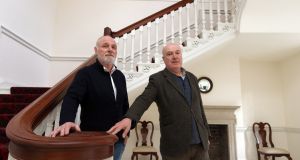 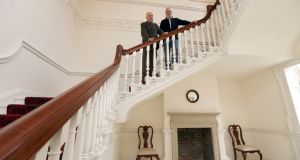 Conservationist Ian Lumley of An Taisce (left) and developer Pat Wigglesworth at 3 Henrietta Street in Dublin which has been converted into apartments and will soon be available for corporate lets. Photograph: Laura Hutton 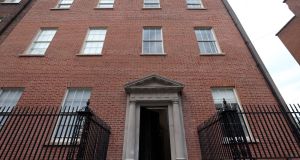 The exterior of 3 Henrietta Street in Dublin which has been converted into apartments and will soon be available for corporate lets. Photograph: Laura Hutton 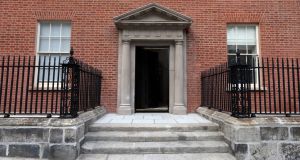 Number 3 Henrietta Street in Dublin has been restored after decades of decay and dereliction. Photograph: Laura Hutton 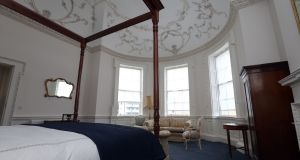 A bedroom in 3 Henrietta Street in Dublin. Photograph: Laura Hutton 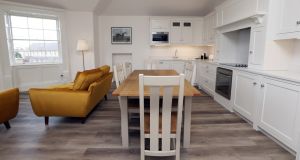 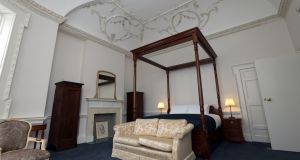 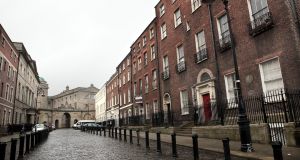 I never thought I would live to see the day when we would be able to herald the arrival of a renaissance for Henrietta Street, in Dublin 1. But with the superb restoration of No 3, after decades of decay and dereliction, we can say that the city’s oldest and grandest Georgian street – so long ignored and neglected – is finally on its way to a brighter future.

Henrietta Street’s story is the very opposite of “rags to riches”. Developed in the mid-18th century, it is our oldest Georgian street, lined on both sides with big mansions that were once occupied by the rich and famous, only to go down in the dumps as fashionable society decamped to the southside, leaving the houses to be turned into teeming tenements.

The 1911 Census recorded more than 100 people – men, women and children – living in No 14, which has now been renovated by Dublin City Council to give visitors a glimpse of what tenement life was like. For decades, that house had been effectively abandoned and used occasionally as a set for the likes of Strumpet City and films requiring distressed interiors.

Otherwise, the vast town mansions on Henrietta Street were taken over by conservationists such as the late Uinseann MacEoin, who let his out room-by-room to artists, or by Michael Casey, who turned another (No13) into an airy family home, or Ian Lumley, heritage officer of An Taisce, who spent years restoring the one next door with its tall first-floor windows.

Another house, No 7, is being restored as a family home by barrister Fergus Ryan, who bought it last year from the MacEoins. The last remaining gap, where nearly half of No 15 was demolished in the 1950s, remains to be filled by Na Píobairí Uilleann, if only they could raise funding. And printmaker Alice Hanratty, who’s been living in No4 for 40 years, wants to see it simply reinstated.

Lumley got together with Dublin-based developer Pat Wigglesworth to restore number 3, which had long been owned by eccentric landlords, the late Ivor and Marie Underwood, who held dozens of mainly decaying Georgian houses in their extensive property portfolio. Its condition was truly dreadful, both inside and out, riddled with dry rot and brick decay.

It was in such a bad way that, when put up for auction in October 2016, the property failed to attract a single bid. That’s when Lumley and Wigglesworth accidentally bumped into each other in a local barber shop and decided to make an offer of €510,000 for the entire lot. This was accepted, paving the way for them to undertake the daunting task of restoring it.

Walking up the granite steps and through the front door, I could barely believe this was the same house as the wreck I used to pass by quite regularly over the years, on the way to Lumley’s house for an informal dinner party. The magnificent entrance hall, as big as a modern three-storey house, and fully-reinstated grand staircase are truly breathtaking to behold.

It had lost this rococo staircase decades ago when the space was carved up horizontally to create two more “bed-sits”, making a total of 19 in the whole house. As refurbished, it contains seven very spacious period-style apartments, which are targeted at Dublin’s growing “commercial lets” market, reckoning they might appeal to well-paid multinational executives.

“We didn’t want to exploit the building,” Wigglesworth says. “We could easily have divided it up into 12 apartments, but we wanted to do this right, using the least interventionist approach. So we’ve got full-floor apartments in the basement, hall floor and first floor – each of them nearly 90sq m in size – and four smaller ones on the upper floors.”

Fitted kitchens are free-standing contemporary units within rooms, so residents can still enjoy the elaborate cornices above, all painstakingly stripped and cleaned by Frank Newman’s Irish Fine Art Plasterwork Ltd, which also did plaster casts for period-style fireplaces. The cornices were repainted by David Walsh, whose work stands out in the staircase hall and adjoining rooms.

Bathrooms are luxurious, clad in marble, with rainfall showers – but no baths. Dublin City Council’s conservation officer Mary McDonald took the view that they couldn’t have any baths in the house because one or other of them might overflow. Otherwise, Lumley and Wigglesworth are quite happy with the level of co-operation they received from the council.

But their first priority was to redo the roof, to stop rainwater feeding the dry rot that had spread right down through it, damaging wooden beams in its central spine; these all had to be replaced with steel beams on the advice of structural engineer Martin Lohan. “We weren’t afraid of it, because we put together the right team who shared our vision,” Lumley says.

Although both of them had long-time accounts with AIB and Wigglesworth had previously obtained loans for other projects – including Broadstone Hall, a very successful student housing scheme done in 2005 – the bank “just didn’t want to know” about No 3 Henrietta Street, so they had to raise funds from Pepper Finance Ireland for the €2.3 million restoration project.

They also had “great difficulty” getting insurance, as no Dublin-based company would even quote for it. “So we had to go to Lloyds of London to find an insurance company specialising in heritage properties, and that cost us €19,000 just for the two-year construction period.”

But they had one of Ireland’s best conservation architects, James Kelly, supervising the work.

Inevitably, compliance with fire regulations was onerous, so a misting system was installed throughout the house. Each of its units can detect the outbreak of fire and then throws out a spray at six litres per minute to put it out. An emergency control panel, clearly visible to the fire brigade, also had to be put in the entrance hall so that electricity could be turned off.

Every Georgian-paned window, of which the house has 54 dating from nearly every period since 1750, had to be taken out and restored individually, at a cost of €224,000; the survival of their neo-classical architraves and shutters was almost miraculous. None of the original doors had survived, but they’ve all been beautifully reproduced by master carpenter Ciarán Monaghan.

The reinstated grand staircase, an absolute triumph in itself, was expertly done by Sligo-based Eamonn Burke Stairs Ltd and came in three large sections, for fitting on-site. Thirty exquisite rococo tread-ends, which had been found in a bag in the Underwoods’ garage, were stripped of layers of paint and then fitted to the new staircase, which came with a suitably swirling newel post.

All of the apartments in No 3 Henrietta Street have period furniture, including some pieces dating from the 18th century, as well as framed prints collected by Lumley over the years. “All I can say is that we’ve done our best,” Wigglesworth says. And now the house needs to earn some money to repay the cost of its restoration, even if it is for Airbnb-style short-lets.

Henrietta Street is no longer the bleakly impressive backwater it used to be. Indeed, there has been a noticeable increase in footfall on the once-forgotten street, flowing from the Technological UniversityDublin’s new campus in Grangegorman as students take a short-cut through the King’s Inns to Bolton Street and the city centre – a wonderful peregrination in itself.