Dwell in marble halls in Foxrock for €3.5m

No expense spared in home with cook’s kitchen, four en-suite bedrooms and a cinema 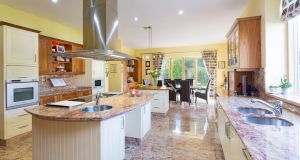 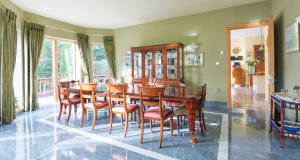 It’s all very private at The Birches, a quiet leafy enclave tucked off Torquay Road in Foxrock.

The current owners purchased their site in 2003, on which part of the former bungalow - Torquay Lodge - occupied, and together with architect Gerry O’Meara of SBA, they planned their ideal home.

“This is our 11th house, and after living in various parts of the world, we had a list of what we wanted,” say the owners who are downsizing from their empty nest.

First up it had to be eco-friendly – it runs on a geothermal heating system giving the house a very efficient BER of B3. Because it is so large, it extends to 469sq m (5,048 sq ft,) the property required two bore holes. These boreholes drop to a depth of 160m – the same length as The Spire on O’Connell Street in Dublin.

Underfloor heating was second on the list, as all of the rooms downstairs – with the exception of the cinema and family room – have solid marble floors. There is quite an amount of marble used throughout the house – which may or may not suit the next owner – but this is easily changed.

Third was the requirement for four large en suite bedrooms. The main bedroom is so large that it surpasses the size of many five star hotel suites. Not only is the en suite and bedroom spacious, it has a separate living room with an open fire and a kitchenette – neatly hidden behind a double wardrobe style unit, which was fitted by Andrew Ryan.

Next on the bucket list was a home cinema, which sits discretely to the rear of the family room, and just off the kitchen. Decked out with velvet swag and tail curtains to mimic a cinema of old, it has a full acoustic system and is operated through a projector screen.

A cook’s kitchen was the final essential – the large room set to the rear of the house has a central island, and as you would expect, a huge volume of workspace lies between the appliances, all of which are Gaggenau.

The main reception areas are laid out in an L–shape and accommodate a spacious dining and drawing room. There is so much room here that a baby grand piano just fades into the background.

In addition to the four bedrooms upstairs, a fine home office overlooks the front garden.

The grounds extend to a third of an acre and have been laid out with herbaceous borders filled with an abundance of plants. Currently in bloom are azaleas and a lovely Magnolia stellata.

The property, where no expense has been spared, is in turnkey condition and on the market through Sherry FitzGerald seeking €3.5 million.