Nosy neighbours and net curtains: how to survive an open house viewing

If you’re planning to put your home on show, here’s some solid advice from estate agents 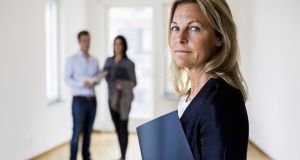 An experienced estate agent will know almost immediately if a viewer has any intention of buying. Photograph: Getty Images

Who lives in a house like this? If your house is on the market, chances are a goodly portion of its viewers will already know you live there. You’ll know where they live too – nearby.

Estate agents see nosy neighbours all the time. “We run open houses and that means anyone can come in and have a look around, unfortunately including those who aren’t interested in buying,” says David Madden of Move On.

“We can always tell the tyre-kickers, though, many of whom might be from the same estate, because they come in, go through the house and are gone in a few minutes. They don’t ask questions and don’t want to engage with the estate agent at all.”

By contrast, someone who is seriously interested in the house “will spend 20 or 25 minutes going around it and will ask questions about schools and the local area, or about plans if they’re thinking of extending it”.

But if estate agents are sizing up prospective buyers, it works the other way too. What viewers hate most at viewings is an estate agent who follows them around. A survey carried out by Move On found 85 per cent of viewers object to it.

“As estate agents we’re all trained to run around after people talking about square footage and saying things like ‘here’s the ensuite’,” says Madden. “But we’re much better off staying downstairs and letting them look for themselves and then answering any questions they have.”

“Even the days of asking sellers for freshly baked bread are long gone – people are too savvy to be taken in by it. You might see coffee trucks where big new schemes are being launched, but that’s about it,” says Madden.

Edel Keane of Keane Auctioneers in Wexford can spot a genuine buyer from 20 paces, or the temporal equivalent. “I know within minutes if someone is going to buy from their facial expression,” she says. It’s what enables her to see through the dissembling gambits – namely grumbling and fault-finding.

“We know all the tricks,” she says. The most common one is “I’m at the top of my budget”, which then turns out not to be the case.

The room serious buyers gravitate to first in a viewing, and return to most often, is the kitchen, she says, followed by the livingroom, so it’s worth making an extra effort with its appearance.

Like most estate agents, she’s gotten used to oddball queries. “Just this morning I got a request from a buyer looking to have mosquito nets put in. I don’t think we get mosquitos in Wexford, do we?”

Not all sellers will opt for an open viewing. “Some vendors don’t like them because they want a bit of background on who’s coming first, but they are a great way for agents to gauge interest,” says Rory Fenelon of Fenelon Properties.

If he can he opts for an open viewing for the first one or two showings, and after that by appointment.

He too can spot nosy neighbours a mile away, mainly “because they fly in and out and don’t want to talk to you at all.”

As the seller, the best thing you can do to help yourself is have the house clean and warm. “It’s the most important thing. If you’ve scruffy furniture maybe take it out, and a scented candle doesn’t cost much but if people come in and feel it’s cold and dreary, that’s it, they switch off.”

If your house is worth in excess of €700,000, you might consider getting it professionally “staged” for sale, he suggests. “But for the average €350,000 to €450,000, there’s no need. Just spend the money on cleaning and repainting if necessary instead.”

After so many years there, people have just accumulated so much stuff and of course you have to be sensitive

Younger buyers don’t go in for the poker-faced viewings of their parents, a generation schooled at not seeming overly keen, he says. “Young people wear their heart on their sleeve and don’t bother with that. They mostly don’t have time for dilly-dallying about either. It’s older people who do it, they’re the only ones still with that element of ‘country cute’.”

He too gets asked silly questions. “I’m often asked what it’s like here in the snow. How do you answer that?”

“These are the houses that have reared a family and so are most in need of a declutter. After so many years there, people have just accumulated so much stuff and of course you have to be sensitive, because they are so proud of it all,” says Fenelon, whose personal pet hate is net curtains.

“Whatever way they are put on you can’t pull them back to let the light in, which is much more appealing to buyers.”

When vendors leave for a viewing, he simply tucks them up over the curtain pole. “It looks terrible, but letting the light in is more important. Light and brightness is what you want,” he says.

Michelle Kealy of Lisney in Terenure recently found a 20-year-old brochure the firm prepared for vendors to help them get their home ready for sale. “Some of the advice in it makes me laugh now, such as ‘open your curtains’ and ‘if it’s an evening showing, turn on the lights’,” says Kealy.

But some of it still holds true, such as telling them not to leave the washing machine, tumble dryer or dishwasher on during a viewing.

“People still do that and it’s very noisy. The buyer will say ‘What’s that noise?’ and when I explain it’s the dishwasher, they look at me with that look that says, ‘You’re an estate agent, it’s obviously the Luas, you can’t fool me,’” she says.

Her favourite foible is wall-tapping. “I’m fascinated by it. Maybe they really are structural engineers but it always looks like ‘no one’s going to cod me’,” she says.

Daft questions are on the wane, Kealy reckons. “I don’t get them because they all come armed with their Google searches and their folio numbers from Landdirect.ie and the BER numbers from SEAI – they’re mad into heating,” she says.

Buyers find it too intimidating if you’re there. They’re reluctant to talk about redecorating or extending

To get them in, work on your kerb appeal. Buyers will typically drive by a few times before deciding to come for a viewing. Clean the fascia, soffits and gutters, make sure windows are clean and pull up weeds. And don’t forget the front door – “it’s the first thing they see and they’re looking for signs of wear and tear,” she advises.

Then do yourself a favour and make yourself scarce.

“Buyers find it too intimidating if you’re there. They’re reluctant to talk about redecorating or extending and it feels claustrophobic. They’ll run through the house in 10 minutes, forget it straight away and won’t come back for a second look,” says Kealy.

For a typical three bedroom semi-detached house, the average time spent looking is 20 minutes; for a four-bed it’s half an hour, and most will want to see it a second time before they make an offer. When they do, do yourself another favour: don’t take it personally, don’t take offence and do let the agent handle it.

There’s a good reason for this. “The single thing I hear most often is, ‘Are they mad?’” she says.