Castles and cottages with an edge in the conservation game 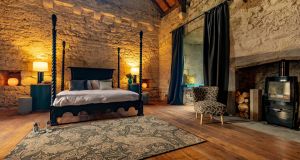 What do 1830s almshouses in Co Waterford, an “off-the-peg” Swiss cottage in Co Leitrim, a Tudor-era tower in Co Kilkenny and a mid 18th-century house in Dublin have in common? Not much on the face of it, but they all feature prominently in the 2019 Irish Georgian Society Conservation Awards.

Having served on the jury for these biennial awards for more than a decade, I’ve learned not to be so bowled over by the grandeur of stately homes as to overlook modest vernacular buildings. And this year, once again, we selected four restoration projects that infused elements of Ireland’s architectural heritage with new life.

The rescue by Aughey O’Flaherty Architects of long-derelict Boyce’s Almshouses in Tallow, Co Waterford, transforming them into four cheerful social homes for tenants of Waterford City & County Council, won a commendation not least because it was done so well, even with a limited budget of €475,000 (only €118,750 per unit).

With its beautifully lime-rendered exterior, careful landscaping and cosy interiors given more daylight by plate-glass windows at the rear, the Tallow project is an object lesson for other local authorities in how to make good use of neglected historic buildings. Indeed, it was intended by Waterford to be an “exemplary conservation project”.

Next up was Tubbrid Castle, not far from Kilkenny city. A once gaunt and roofless 16th-century tower house, it was brought back to life by Bluett O’Donoghue Architects for holiday lets on behalf of the late John Campion; he had dreamed of its restoration for years and lived to see the project virtually completed before he died last year.

Project architect Cormac O’Sullivan took us up steep stone stairs with rope handrails to a great hall on the first floor, explaining how the tower house had been restored and supplied with under-floor heating and modern bathrooms as well as having its battlements reinstated to their original profile and height. It’s a really inspiring project.

We also had a tour of the Medieval Mile Museum in Kilkenny itself with architect Niall McCullough. Installed in the redundant St Mary’s Church, with new additions unusually in lead rather than zinc, it peels back the layers of history to reveal old tombstones under a roof stripped back at the crossing to show its timber structure to great effect.

But the jury felt that McCullough Mulvin Architects had not been well served by the exhibition designers, Edinburgh-based Bright, who promise “visitor experiences, perfectly expressed”. The souvenir shop is located right inside the entrance, and we thought the display of artefacts was quite incoherent, with some very poor labelling.

It was Una Ní Mhearáin, project architect with Consarc, who showed us around the opulent interiors of Adare Manor, which has been conserved and refurbished in line with the best conservation principles and practice. Unfortunately, it is overshadowed by a very large “neo-Gothic” extension designed by London-based Reardon Smith Architects.

Ní Mhearáin was also our guide at the O’Brien Column near Liscannor, Co Clare, erected in 1858 to commemorate local MP Cornelius O’Brien, who opened up the Cliffs of Moher to tourism. The urn on top was in a precarious condition, but nothing that hot lime and a steel pin couldn’t fix, and the monument restored without betraying its age.

A cottage and a castle

More impressive was the timber-framed Swiss cottage, near Mohill, Co Leitrim, which had lain derelict for many years until its careful restoration by Bray-based architect Adrian Buckley and local contractor Vincent Beirne. They pieced this “catalogue house” back together again, including its jigsaw puzzles of lime-mortared bricks.

Once part of the Lough Rynn Castle estate, the cottage stands on about two acres of ground shaded by mature trees and is probably the only example of its type in Ireland. With its cosy interiors, enhanced by an eclectic collection of art on the walls, we had no hesitation in giving it the first-ever Mary Bryan Prize for Conservation.

At Killyleagh Castle in Co Down, we were greeted by Gawn Rowan Hamilton, who lives in the great old pile with his wife and young family, continuing a 400-year-old tradition. Belfast-based Alastair Coey Architects re-slated its complex roof, including turrets, and re-harled the corner towers using traditional lime mortar.

We were disappointed that there were not more entries from Northern Ireland, particularly as conservation projects carried out there are generally done to a high standard, often with significant finance from the British National Lottery’s Heritage Fund – something that’s unmatched south of the border, even after all these years.

Back in Dublin, we visited Thomas Burgh House in the Liberties, turned into offices for builders JJ Rhatigan by Derek Tynan Architects, in collaboration with Carrig Conservation. Formerly St Luke’s Church, it had been a roofless ruin for years but now has three floors of office space ingeniously inserted into the historic structure.

We were underwhelmed by 14 Henrietta Street, restored as a part-tenement museum by Gráinne Shaffrey Associates for Dublin City Council. Reinstatement of the grand staircase in concrete, while entirely legitimate to distinguish new from old, did not go down well and neither did the design or confusing layout of the museum.

The jury unanimously awarded the prize to 3 Henrietta Street, rescued from decades of decay by Ian Lumley and Pat Wrigglesworth and turned into stylish apartments for corporate short-lets. The entrance hall, with its reinstated grand staircase and rococo plasterwork, is a wonder to behold, and offers hope for Georgian houses everywhere.

Restaurant meal kit review: A Spanish feast in the comfort of your own home
6