New lease of life for Glasnevin original for €775k 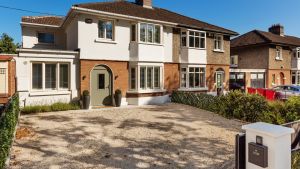 While today Glasnevin is an attractive leafy suburb of Dublin, in the 1700s the Protestant Archbishop of Dublin wrote: “When any couple had a mind to be wicked, they would retire to Glasnevin.”

For years grave-robbing was rife at Glasnevin Cemetery, with armed guards stationed at the round towers from the late 1800s to the early 1900s in an attempt to deter Dublin’s nocturnal entrepreneurs.

At one point in the early 1900s a rare parrot was shot by a trigger-happy guard from one of the towers at the cemetery, and owner William Fogarty sought £100 in compensation from the cemetery for the demise of his rare feathered friend.

At that time houses on Botanic Avenue were advertised for sale in The Irish Times for £225, and by 1930 Glasnevin was a well-established suburb of the capital.

They converted what was the old garage into a television room-cum-office to the front of the house, and a spacious utility to the rear, in addition to a double height extension.

“Shomera was engaged to build the timber frame extension, and they also helped us come up with the final design,” says O’Hora. A large live-in kitchen, dining and living area was added downstairs, with an en suite main bedroom upstairs. A formal living room also sits to the front of the house.

The extension centres around a large island, complete with an oven range set into a quartz island. The kitchen, and all the fitted units throughout the house – in the bedrooms, television room and utility – were designed and built by Tierney Kitchens.

The space is flooded with light, and opens out to the rear garden which extends to 65ft (20m). Landscaping company Evergreen was tasked with transforming the space, which is now laid out with a large lawn, flanked by olive trees, hydrangea and French lavender.

The property now has three large double bedrooms along with a box room, and a spacious family bathroom on the upper floor.

O’Hora, bitten by the renovation bug is in search of another property, and has placed her home, which now covers 156sq m (1,679sq ft) in turnkey condition on the market through Sherry FitzGerald with an asking price of €775,000.