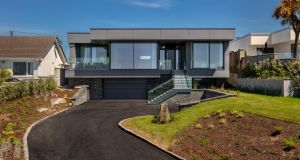 Known as the gourmet capital of Ireland Kinsale, the Co Cork coastal playground resonates with a high-octane energy – even in the depths of winter.

It’s food offer is first class but so too is the range of architect designed, high end homes that appeal to its cosmopolitan crowd. It may even be the modernist capital of Ireland with many of the most impressive properties authored by Richard Rainey, a South African talent who decades ago moved to Ireland’s answer to Camps Bay, having first discovered it when he came to visit his sister, estate agent Victoria Murphy.

His homes are open and light-filed and while large panels of glazing form part of his signature his time in the Rainbow Nation taught him to be also highly aware of the glare of the sun. There his overhands provided shade. Here they minimise glare.

High on the bluff and facing due south overlooking Kinsale Harbour with James’ Fort to the right and Charles Fort to the left sits his latest creation, a modernist house of glass, stone and steel.

It replaced what was a very ordinary bungalow that was situated beside one of the first flat roof houses he had designed in the town and its new owners fell in love with the site at first glance. “We realised that the incredible panoramic views that it afforded provided the opportunity to build our dream home.”

The glazing is broken up by panels of Equitone, a fibreous cement made by Tegral that comes in a range of strong neutrals that don’t fade when weathered. He selected a a dark anthracite grey to blend the house into the hillside behind.

To make the most of the narrow site Rainey suggested digging down to create a garage at basement level eliminating that most Irish of problems, where you look out at vehicles parked in front of the property. By adding this feature the owner’s vehicles could be stored out of sight. It also meant that you could decant shopping from the car into the house while out of the weather for while the images show Kinsale on a sunny day coastal residents know that such areas can just as easily blow a filthy gales.

A set of steps lead from the basement, where there is also a music room, a utility room and acres of storage leaving the floors above devoid of such engine rooms and potential clutter and allowing Rainey to really open up the living area and kitchen.

A bespoke handrail with LED strip lighting at its base discreetly illuminates the steps. One of the stairwell walls is clad in Airslate, a stone-look material than comes in many different textures and has been affixed at feature points throughout the interior. Made by Porcelanosa it can be sourced through Tilestyle.

The entrance hall is roomy and lit from above by a large roof light and there is a smart credenza by Cattelan Italia breaking up a half wall. A painting bought at Kyra Interior on the Baleric island of Mallorca hangs above it. The same gallery supplied the painting above the basement stairwell.

The living room and kitchen are tiled in slabs of timber-look ceramic. The external walls here are all glass. You can shut the world out with closing the sleek Silent Gliss curtain system, which has the recessed rails so the fabric draws the eye all the way up to the ceiling. The walls are painted in Railings by Farrow & Ball and should you get bored of the view you can turn your attention to the space’s other focal point, a tri-aspect gas fire, Box by Bellfires, supplied by Flame by Design.

The L-shaped sofa was sourced from online seating firm Made.com while the owners picked up the coffee table from Latitude, a local shop specializing in custom art using nautical maps. The chairs, one a ribbed grey and the other a traffic light red, were picked up in Casey’s in Cork city where the couple also found the dining set. The finish is slick, thanks to the attention contractor Brian K Building paid to the detailing.

Glass doors open out to a glass balustrade terrace that faces due south and is paved in a limestone slab. The rattan suite they bought at Dunnes Stores.

The kitchen is supremely minimalist. The Siematic design, supplied by Arena Kitchens has a squircle-shaped island, a square whose corners have been softened and Silestone countertops in a soft foamy sea shade appropriately called Winter Storm. Its cupboards conceal crockery and a wine fridge.

The owners are delighted with the way it turned out. “Richard Rainey was able to translate our vision into a great aesthetic, but one which also feels very much like a home rather than being too stark which can often be the case with structures where glass is predominant.

“Now that the house is complete, there is nowhere nicer than sitting in the lounge taking in the beautiful and expansive scene across the harbour and Kinsale which is like an ever changing artwork. We are very lucky.”