John Boyne’s answer to breaking up: Call in the decorator 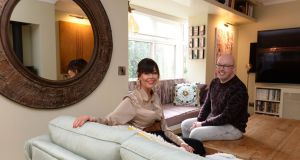 After a relationship breaks down, the route from cohabiting to separation is often much the same. Possessions are divided; there’s a mild scuffle over who exactly bought the kettle; boxes are loaded into a van on one sorry Saturday morning. The remaining party, meanwhile, learns to live, or at the very least rub along, with the ghosts of romance past.

Not strictly so in the case of bestselling author John Boyne.

Eighteen months ago and after an emotional breakup, he decided to give his four-bedroom detached home in Rathfarnham an entire overhaul.

“To be honest, a lot of it was clearing those memories away and not feeling that I was missing someone in the house – rather, that it was a different house,” he admits. “Otherwise, every corner has some memory attached to it. I didn’t want to leave the house either, as my parents and sister live nearby, but I wanted this house to embrace me. I hated the idea of it holding any negative vibe.”

Intent on a full-blown do-over, Boyne realised he would need the expertise of a professional designer. He liked the cut of Caroline Flannery’s jib and the two met for a consultation. Job done on creating a full brief, Boyne cleared out any possessions that weren’t of personal sentimental value; a process he describes as “cathartic”.

He moved to London for a few months and let Caroline and her team “go mad”, keeping in regular touch via WhatsApp. The end result is a solo dweller’s dream, and Boyne has repurposed many of the rooms. There’s a reading room, a music room, a gym area and not one but two workspaces.

“The only real thing in the brief was, ‘make this completely different’,” recalls Boyne. “Finding spaces for all the books was a big thing, and the one thing I specified from the outset was that I wanted a wood-burning stove.”

Flannery says: “Once we built up a rapport with each other, I got to know his style. He’s very design-savvy, and became even more so as the project progressed.”

By his own admission, Boyne’s interest in interior design was precursory at best at the outset of the project.

“I’d never heard of or seen simple light bulbs without a triangular lampshade around it,” he smiles, pointing to one of the new Edison-style light fixtures around the home (many of which come from Mullan Lighting in Monaghan).

“Before, I was just like, ‘where does the sofa go? Where will the TV go?’ I’d never thought about (looking at interiors) websites before, but I got really into design and developed an aesthetic of my own. That would never have happened without Caroline.”

As a client, Caroline recalls that Boyne was among the most decisive she’d met: “He knew exactly what he wanted in terms of colours and fabrics. I’d open up a book (of fabric swatches) and he would just go ‘yep, that one’.”

Eye-catching light fixtures aside, Caroline’s choice of large statement mirrors, often in brass, burnished gold or copper, adds a sense of continuity throughout the house.

“It’s difficult to get really big mirrors in shops so I source them online, or source them in antique shops, or have them made bespoke for particular projects,” she explains. (Other sources include the Conran Shop, and South African furniture brand Kino).

The landing and part of the attic have recently been converted to create extra bookshelf space that stretches to the skylight. It’s an arresting feature, not to mention an ingenious use of otherwise redundant space.

“In there is my American literature,” he says, pointing to a lavender reading room off the landing, “and here is my Irish literature,” referring to the integrated shelves. Elsewhere in the house, books have been grouped into clusters in every room. Translated fiction live in one area; non-fiction in another. In the living room, Shakespeare’s plays feature, fittingly enough, Shakespeare bookends; just one set of many.

“You’ll see the bookends everywhere, and I love collecting them,” he enthuses. “You could have a wall, but I didn’t want the books to feel like they were closing in on me.”

Elsewhere, many objets d’art, from vases to bells, have pride of place on integrated bookshelves, keepsakes from Boyne’s extensive world travels.

“I’m a real Australia-phile – I spend a month in Sydney every year (in January),” he says. “I got these paintings in Sydney and had them shipped over.”

The downstairs guest bathroom, meanwhile, features a sketch of Boyne by Oliver Jeffers (who has illustrated many of his books), and a framed picture of a Lego version of the character in his best-known book, The Boy In The Striped Pyjamas.

In the living room, a wood-burning stove and an accompanying log feature were installed in the middle of the space (thanks to carpenter Emile Coghlan). To the rear of the downstairs area, an eight-seater table and imposing kitchen island were replaced with a smaller marble dining table and a softer, curved kitchen unit that nicely divides the kitchen and dining area.

Boyne’s attention to personal detail is impressive throughout. A big fan of tea, he has placed his collection of teacups and teapots on display in the kitchen, while the retro kettle and toaster gleam with silver and brass flourishes.

Among the biggest lessons that Boyne has learned amid the refurbishment is to wait to purchase the right item, not the more available, convenient item.

“I think I did this in the olden days – when you move into a place, you feel you have to get everything and shouldn’t have to wait,” he recalls. “Caroline would say, ‘this mirror won’t come for five months’ and I had to be okay with that.

“Rather than me just going to a shop in town or to Sandyford Industrial Estate and thinking that was all there is to buy, I realised that there’s so much more out there if you’re willing to search for it and wait for it.”

Elsewhere in the home, Boyne has created two workspaces. There’s a “winter” office to the front of the property painted in delicate pink, and a “summer” office in a two-room cabin in the backyard. The summer office, accented with furniture from Anthropologie and the Lollipop Shoppe, is painted a lush, enlivening green. The shelves bear the many translated versions of his 15 books. Next to his summer office is a space for gym equipment, cleaning supplies and a glass fridge replete with mini bottles of Moet & Chandon.

All in all, the entire effect is a dream bachelor pad with several delicious flourishes, yet still feels like a calming sanctuary. It’s the latter quality that Boyne is particularly taken with.

“I travel a lot for work, but given my choice I’d rather be here than anywhere,” he says. “Feeling safe and comfortable here is very important to me. I love the idea of not just other people coming in and finding it interesting, but I me finding it continually interesting, too.”

Though he is clearly enamoured of his new-look home, Boyne says the space will continually shift as he acquires new artwork and keepsakes from his travels. He adds that if he were to live with another partner, the space would likely change too.

“If I ever live with anyone again, they’d better like books,” he smiles.

*For more information on Interiors By Caroline, see interiorsdesignerdublin.ie or @interiorsbycaroline on Instagram.