Five-storey Dublin corner property with a one-bed basement apartment, a lift and planning permission for a roof terrace 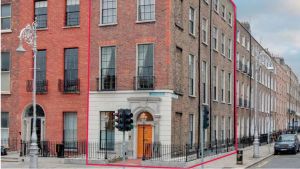 Prior to the onset of the second World War there was a plan in place to demolish Merrion Square, which was deemed at the time to be “un-Irish”. Luckily, as the demands of “The Emergency” took precedence, the drastic plan was put on hold.

Today it is considered the most important Georgian square in the country, and it is now at its quietest since it was built in the 1760s. The lawns of Leinster House which are located on the square, once hosted a fair not dissimilar to what became the Spring Show in the RDS, where bulls and livestock ran amok.

When genteel Georgian families kept their pièds-a-terre here, all the living was conducted on the upper floors, to escape noise from horses and carts clattering about the place; the air was also considered cleaner on the upper levels.

For those living there in 1785, they would have been treated to the sight of Richard Crosbie decked out in fur-lined silk robes and a leopardskin cap, taking off from Leinster Lawn in his hot air balloon, in an attempt to cross the Irish Seas.  He only made it as far as Dublin Bay where the balloon came to a watery end.

Today there are just a handful of owners of private homes on the square, including designer Louise Kennedy, and financier Dermot Desmond, with most of the properties in commercial use, including The National Gallery of Ireland and The Irish Architectural Archive.

The east side was developed by architect Samuel Sproule, one-time spy for the then government, and tutor to architect Francis Johnston, architect of the GPO.

Notable alumni of the square include Oscar Wilde who grew up in number 1, where his mother Speranza, a nationalist and feminist, was the hostess du jour. Daniel O’Connell, the Liberator, bought number 58 in 1809, whereupon his frugal wife Mary lamented “and where on earth will you be able to get a thousand guineas”. Sheridan Le Fanu and George Russell AE also called the square home.

WB Yeats lived in the house owned by Maud Gonne at 82 but also called number 52 his home for a time. It is now on the market through Lisney for €3.5million.

The property was bought at auction by its current owners in 2006 for €3.5million and was formerly the offices of estate agent Hooke and MacDonald. It is since recorded on the property price register as having sold in 2015 for €2.9million – this appears to have been an inter-company transfer and it was never listed for sale.

Like its peers, it is a whopper of a property - there are 26 sash windows – with a floor space extending to 468sq m (5,037sq ft) over five floors. It comes with a six person lift, and in a contra deal with Dublin City Council there is planning permission for a small roof terrace if the existing lift shaft is removed from the roof and placed in the basement. This is to meet aesthetic requirements. The estimated cost for this project including the terrace is €120,000 according to Stephen Day of Lisney who is handling the sale.

In its current layout the property occupies a corner site between Mount Street and Merrion Square.The main house has been rented as a private residence in recent years, while a caretaker occupied the one-bed apartment in the basement with a separate entrance on Mount Street. Internally there is access to the basement via a secondary staircase. The main staircase is really stunning and one of the many highlights within.

The property has just three bedrooms on the upper levels, the master with an open fire is enormous and, along with an adjacent bathroom, occupies an entire floor. The two other bedrooms are on the top floor.

There are marvellous original features throughout including ornate plaster work, fireplaces and windows; where the city skyline takes in the Central Bank and church steeples. Considering these views, the option of a roof terrace would be a superb addition.

A distinguishing characteristic of the houses on Merrion Square that attracts tourists is its iconic doors, and number 52 has a fine portico which opens into a formal lobby complete with an open fireplace.

The photographs really do little justice to this property, and new owners will want to choose a different style to its current décor, which is quite bland for such a Georgian gem. What number 52 offers – besides its vast space, city centre location and being home for a time to one of the greatest poets of the 20th century – is a chance to call one of the most culturally significant squares in the country “home”.