Priced out of Killester? Have a look at nearby Coolock 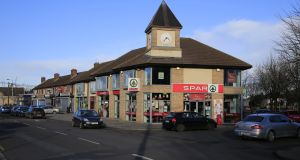 Coolock, on Dublin’s northside, has had a number of building spurts, with the early 1970s producing one of Dublin’s most intriguingly named group of streets. Tranquillity Grove, named after the Tranquillity Base, where humans first landed on the moon, leads to Eagle Park, Apollo Way, Armstrong Walk and Aldrin Walk.

The area was transformed from largely rural green space to a combination of social housing and private builds around the 1950s, with the former situated largely to the north, and the latter largely to the south.

The village stretches back in time, long before it was identified in Samuel Lewis’s A Topographical Dictionary of Ireland, published in 1837, as “a parish, in the barony of Coolock, county of Dublin, and province of Leinster, 3¾ miles (N.N.E) from Dublin, on the road to Malahide; containing, 914 inhabitants, of which number, 190 are in the village, which contains 26 houses . . . the soil is fertile, and well adapted for corn . . . There are numerous handsome seats and pleasant villas, from most of which are fine views of the bay and city of Dublin.”

Today, Coolock has a sprawling suburban feel and the neighbourhood encompasses no less than three postal districts – Dublin 5, Dublin 13 and Dublin 17. Prices are more affordable in the area, compared with some neighbouring addresses, according to Shane Doyle of local estate agency iMove.

“Along the fringes of Coolock can be found much privately built housing in the likes of Artane, Beaumont and Killester, which achieve higher prices, despite sharing a very similar geographic location to Coolock,” he says.

“A number of buyers are also moving to Coolock from the likes of Balbriggan, Lusk, Rush and Ashbourne, having grown tired of the longer commute distances from those towns.”

What housing stock is available?
The homes available are largely semidetached, and also a number of terraced houses, as well as the odd detached property dotted in the area.

Apartments are catered for in Larch Hill – beside the M50 on the west of Coolock’s fringes – and were Celtic Tiger-builds, with ideal access to the M50 turnpike.

A massive 95 per cent of the homes in the area are houses, with the remainder apartments and mobile homes. They are all located within a border that is defined by M1 to the west, R139 to the north, Malahide Road to the east and a more ill-defined southern border incorporating Chanel Road, Kilmore Road and the Oscar Traynor Road. Beechpark and St Brendan’s Terrace would rank as some of the more sought-after addresses.

At present, new developments in Coolock are limited. Belcamp, in the northeast corner, is being developed by Gannon Homes, and will bring a selection of three-, four- and five-bed homes to the market. However, there is other land in the area that is ripe for development.

Most notably a parcel of land on Coolock Lane, beside the M50 turn-off and the Astro Park soccer pitches, “where the land is zoned for residential development, but has yet to have any new project announced”, according to Declan Cassidy, managing director with Quillsen.

Getting there
The proximity of Coolock to the M50 is a huge selling point from an employment perspective, opening up access to the industrial areas along the ring road. Also the M1 and N1 running north to Dublin Airport and north Co Dublin and south to the city centre. A number of bus routes serve the town directly, although it lacks a Luas or Dart link.

Village life
The Cock and Bull pub is Coolock’s best known landmark and a fine pub it is too, with refined interior design and good grub. It’s quite a small village but it has a number of businesses that stand out, notably the Bell Pepper Thai restaurant and Joe’s Village Kitchen.

The Northside Shopping Centre is the main retail outlet, with a wide selection of clothes shops, and a handful of eateries and coffee shops, including Costa Coffee.

Green space and sporting clubs
Between Adare Road and Greencastle Road you’ll find the Stardust Memorial Park – an 8-hectare (20-acre) linear park created in memory of the victims of the 1981 fire at the former Artane nightclub, in which 48 people died. Built on a monastic site, the park has a playing field, children’s playground and a spectacular fountain that’s ringed by 48 pillars to commemorate each of the victims.

Parnells GAA club, which boasts current Dublin captain Stephen Cluxton, is right beside the village. Former taoiseach Charlie Haughey was also a Parnells man, with the Royal Irish Academy biography of Haughey stating that he won a county title with the club and was also “suspended for a year for striking a linesman”.

Student life
Coláiste Dhúlaigh College of Further Education is right beside the Northside Shopping Centre. It is highly respected, and offers courses in a wide variety of subjects, across art and design, science and technology, media, health and leisure, business and performing arts.

Who’s buying in the area?
Young families are the buyers drawn to Coolock. The excellent mix of facilities, location close to the city centre and other more traditionally well-heeled northside areas make it a real bargain area in property terms. To say that Coolock has the same desirability in terms of restaurants and coffee shops as say Phibsborough or Drumcondra would be untrue, but it packs a lot more of a punch than public opinion suggests.

It’s also more of a multicultural area than it is given credit for, with many foreign nationals and new-Irish drawn to the area for work.

Like other Dublin areas, some of which have been covered previously in this column, such as Finglas and Clondalkin, Coolock has been branded as dangerous in the past. And there are troubled parts to it. Darndale most notably has a reputation that precedes it. Mark O’Connor’s 2016 film, Cardboard Gangsters, starring John Connors, gave Darndale its most recent injection of notoriety, with a rather bleak depiction of the negative social elements in the area. But Darndale’s problems should not define Coolock, and if they were to do so it would be grossly unfair to the area as a whole and the majority of those people living in Darndale.

Coolock is a diverse town, with a number of well-built homes and an incredibly friendly community, which is trying hard to shed a problematic image that has dogged the town in the past. Indeed, much of this segment of north Dublin has working-class roots, in areas such as Kilbarrack, Donaghmede and Edenmore, which have long been known for their sense of community. This in itself can be a draw for those looking to embed themselves in a neighbourhood for the long haul.

Cool urban styling at this smart seaside terrace for €750k
7