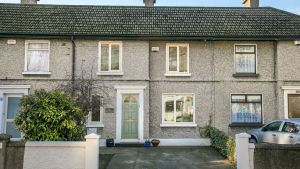 The young couple who bought a mid-terrace house in Monkstown Farm, Co Dublin, in 2005 “just fell for it”, says one of the owners. The previous owners had renovated the former Corporation house to create a very bright and stylish two-bed, with smart touches like coloured mosaic tiles in the kitchen and bathrooms and a bright, open-plan kitchen/diningroom opening into a long livingroom.

Prices in the neighbourhood have been rising: number 112 Oliver Plunkett Road, a larger house extended to 115sq m (1,237sq ft) sold for €540,000 in April 2017; number 2 Oliver Plunkett Avenue, another former Corporation house “needing everything doing”, just around the corner from number 47, has just closed at €367,000.

The front door of number 47 opens into a square front hall; a step down opens into a very smart downstairs toilet with mosaic tiling. A glazed door opens into a long livingroom on the right, with a solid oak floor and a small coal-effect gas fire. A very wide arch leads into the open-plan dining/kitchen area.

The dining area is floored with brown tiles; a step up leads to the kitchen, with a white-tiled floor, cherrywood units, granite countertop, mosaic-tiled splashback and a five-ring gas hob. Glazed roof panels over both the kitchen and dining area and floor-to-ceiling patio doors make it a very bright space.

An open oak staircase leads up to a child’s bedroom and the main bedroom, which runs from the front to the back of the house. It has a cast-iron fireplace and a wall of wardrobes.

The cleverly designed upstairs bathroom at the top of the stairs is bigger than expected, with a corner bath, floor-to-ceiling mirrors and a curved corner shower with orange mosaic tiling.

The patio doors from the dining area open into a small but fairly private garden with a lawn, patio area and lots of mature shrubs. There’s room to park two cars in the front garden.

Number 47 is near the Monkstown Avenue end of Oliver Plunkett Road, a few doors away from a well-tended Marian shrine, across the road from a Centra and pharmacy, and a short walk from fishmongers George’s Fish Shop.

Russian oligarch tees up €85m sale of Dublin’s Morrison Hotel
What sold for about €500k in Ballsbridge, Dalkey, Sallynoggin and Lismore
Delgany Georgian on reduced lands sold for €1.3 million
Cookstown land earmarked for 1,156-unit apartment scheme
What sold for about €645k in Clontarf, Dún Laoghaire, Kilmacud and D18