Home is where the art is for Cavan couple 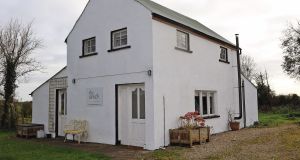 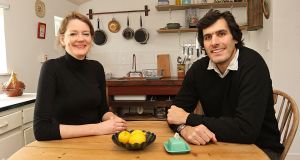 Rebecca admits it was hard initially to make the transition from London back to Cavan, though for Will “it was an adventure”. Photograph: Lorraine Teevan 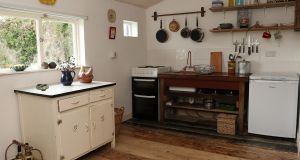 Will’s favourite room is the kitchen. “We improvised it. A friend gave us a Belfast sink and salvaged us a table,” he says. Photo: Lorraine Teevan 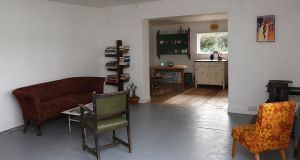 Spartan comforts: “There’s less distraction here,” says Will. “We had to make our own fun, so it’s very conducive to being creative.” Photograph: Lorraine Teevan

What makes an area great? Apart from obvious geographies and proximities, how come homes in some postcodes and counties cost more than others? Obviously house buyers want to gravitate to areas where they’ll find good neighbours, and the type of amenities that a thriving community gives rise to.

You see it on Channel 4’s Location Location Location, when Phil and Kirsty are trying to find a flat in London for the charming couple with no budget. The charming couple usually want to live in Chelsea or Kensington, but their search takes them to the more exotic post codes of Acton and Elephant and Castle. The logic is that as soon as you get a critical mass of people who like nice coffee shops, the nice coffee shops will follow.

The thing is, someone’s got to be first. The first artists to go to St Ives in Cornwall, where there is now an outpost of The Tate, were on to something. Irish artists have known about Leitrim for some time. So where else might you look? CSO statistics show the least costly places to buy in Ireland in 2016, were in Longford, Cavan, Roscommon, Mayo and Sligo. All are beautiful. So surely smart people who can choose where they work should be making a bee-line for these counties? It’s possible they are: in the same survey, Cavan was in the top five, fastest-growing, average prices bracket.

Perhaps this increase has something to do with people like Will Govan and Rebecca O’Connor, who moved back to Rebecca’s home county from London eight years ago, and who, since last year, have been living in their own now-refurbished, old farmhouse, just 15 minutes drive from Cavan town.

“Poverty,” is Will’s laughing answer to my question: What brought you back? “No, seriously,” he says, “we had our first son, he was six months old, and we didn’t want to bring up our kids in the city.” Now the couple have three children: Bruce (8), Ralph (4) and Nancy (2).

The initial idea was for Will, an artist, to paint; and Rebecca, a former literary editor, to write. Instead, they set up The Moth, a literary magazine, featuring contributed work from writers and artists around the world. To support their endeavour in the beginning, Rebecca carried on freelance editing, while Will did some art teaching, and also got a gig commentating at a nearby equestrian centre. This, for those who don’t know it yet, is one of the charms of moving to rural Ireland – unexpected outlets, for possibly hitherto unknown, or unrealised talents.

More recently, they have also converted the barn on their property as a writers’ and artists’ retreat. Fortunately, another set of talents proved to be house renovating and furniture making. “It was pretty damp,” remembers Will. “We had to restructure the roof, rip out everything, strip it, insulate, and then . . . ” “Then it was a blank canvas,” says Rebecca, taking up the story. “We knew we wanted it to be for writers and artists, so we’ve kept it quite minimal, and arranged it so that the living area downstairs doubles up as a studio.”

For anyone looking for somewhere soothing to complete (or indeed start) their magnum opus; somewhere that is rustic but cosy, pared-back but comfortable, and full of eclectic touches, witty and warm; this could be the spot. According to Will and Rebecca, Gulliver’s Travels is said to have been written when Jonathan Swift was on holidays in Cavan, the character of Gulliver having been based on a local man so big and strong he could carry a pony on his shoulders.

The barn had previously done time as a B&B for fishermen, coming to enjoy Cavan’s lakes. “There was a maggot room out the back,” says Rebecca, adding quickly that there are no longer any maggot traces.

“The kitchen is my favourite area,” adds Will. “We improvised it. A friend gave us a Belfast sink and salvaged us a table. We worked with Oliver Reilly from Dorm Contracts (dormcontracts.com), to help us put it together. We were struggling to find old taps to suit, so I found pictures of some made out of old plumbers’ pipes, and Oliver put that together for us too.”

Will also made a set of bookshelves, from some leftover Douglas Fir. “I call them the stickman shelves, after Julia Donaldson’s children’s book character.”

A painting by Cavan artist Paul Galligan, which featured on the cover of the very first Moth, hangs in the living room. That’s not all of Galligan’s work in the house either: “he laid the floor for us,” says Rebecca.

The Moth got its name when their then two-year-old son became fixated on a moth which had landed on a picture frame. Quite simply dedicated to publishing good new writing, it has featured words from Irvine Welsh, Eimear McBride, JP Donleavy, Kamila Shamsie and John Boyne. David Mitchell called it “a beautiful creature,” while Donal Ryan declared it “amazing”.

Following an approach to Darina Allen, with a view to setting up a poetry award, the first Ballymaloe International Poetry Prize was awarded in 2011. The prize is now worth €10,000 to the winner, and attracts entries from all over the world.

The couple also now publish a junior version of The Moth – The Caterpillar, and have conjured up various prizes and awards to inspire. The next Moth Short Story Prize will launch in January, with a closing date in June, and so too will the Moth Art Prize, which offers a month’s residency in the barn, and a stipend of €1,000.

How hard was it to make the move from London? I ask. “It was harder for me, in a way,” says Rebecca. “It felt like a step backwards to begin with. For Will it was more of an adventure. Everything was new.”

“There’s less distraction here,” says Will. “We had to make our own fun, so it’s very conducive to being creative. And The Moth is very international. We could be working from anywhere, but we’ve chosen to be here.”

“Here” is a very beautiful spot. Cavan may not be a coastal county but, perhaps to make up for this, there are said to be 365 lakes – a lake for every day of the year. You’ll find one at the end of Will and Rebecca’s lane. Making the place you can live in, into the place you want to live in, is one of the secrets to making an area truly great.

The Christmas cake and Christmas pudding that always work
9