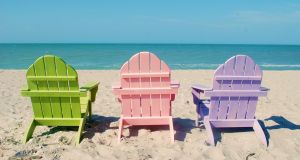 Make your own Adirondack chair

There’s something about the Adirondack chair that shouts summer: its sloping slat back and armrests wide enough to take drinks and a book making it one of the most relaxing seats around.

The chair dates from 1903 when it was designed one Thomas Lee while he was on holiday in Westport, New York, in the Adirondack Mountains. It quickly took off in the neighbourhood and the design quickly spread throughout the US and Canada with various tweaks along the way.

Here in Ireland you can pick one up in garden and furniture stores, or have a go at making your own. Bevel Woodworking School in Fethard on Sea, Co Wexford, offers a two-day workshop in Adirondack chair making which includes all the materials needed to produce your own.

Run by seasoned craftsman, Tommy Kelly, the weekend course runs from 9 am to 5pm each day and includes a step-by-step guide to create the chair using traditional tools. Once done, the choice is to give it a simple oiled or varnished finish or to paint it in a summer tone. There is a course running this weekend, with the next one due to take place on August 3rd and 4th. The course costs €240.
bevelwoodworkingschool.com

Home comforts for those in need

Sofa experts DFS have teamed up with designers and suppliers including Dulux, Scatterbox, Urban flooring, Nook Design and Dusty Boy Designs to refresh some of the interiors at Hugh’s House, a centre in Dublin 1 that provides accommodation to the families of children who are long-term in-patients of Temple Street, Holles Street, the Coombe and Rotunda Hospitals. The makeover is one of DFS’s 50 Acts of Comfort, an initiative launched this year to mark the chain’s 50th anniversary by bringing comfort to those in need. The project at Hugh’s House has created space for an extra bedroom while the main sittingroom for families has also been given a makeover.

Hugh’s House was set up in 2015 by Ade Stack and Martin Curley who lost their son at eight months and vowed to help parents who were struggling to find accommodation in Dublin while their children were in hospital.
dfs.ie

Dublin’s Liffey Swim celebrates its 100th race this summer with more than 500 men and women competing in a 2.2km swim down through the city centre on Saturday, August 3rd.

The oldest city swim of its kind in Europe, it was famously immortalised by the painter Jack B Yeats in 1923.

To celebrate, some of Dublin’s leading artists and illustrators have created their own tributes to the swim with a series of limited edition screenprints hand-produced by Damn Fine Print in Stoneybatter.

Featuring internationally recognised artists such as Annie Atkins, Steve Simpson, M&E, Fuschia Macaree, Peter Donnelly, Alan Dunne and more, the limited-edition prints are all made by hand in Dublin and will be on show at Om Diva, 27 Drury Street, Dublin 2, from Wednesday, August 1st until Tuesday August 13th. They’ll also be for sale at €90 each, unframed. Jump in!
For more details email kim@damnfineprint.com

Designs in the west

Design Island, an exhibition by designers and makers, is returning to Galway for the fifth time this summer, as part of the Galway Arts Festival. The event will run from Monday July 15th to Sunday July 28th at Tribeton, Merchants Road, Galway. The launch evening on Sunday July 14th will allow people to meet the makers of each piece.

“We want to encourage people to come along and see what Irish designers are creating, “explained Ben Gabriel of Irish Design Works.

One of the most striking pieces in the show is this cabinet by Stevan Hartung Furniture made to commission in his workshop in Co Wicklow, while a series of plates called Tree of Life by Ann McBride uses tattoos of the female form to tell an intriguing story in porcelain.

Nikkeby is a new range of chests of drawers and hanging rails from Ikea that will add an instant flash of colour to a space, and provide deep and meaningful storage at the same time.

The crimson colour units come in two and four-drawer options at €65 and €75 respectively while the clothes rack with shelving underneath is priced at €50.
All items will be available in Ikea stores in August. ikea.ie