High on design: the glamour of cycling’s golden era

Designer Paul Smith on the classic style used in cycling, from the shirts to the posters to the sponsors 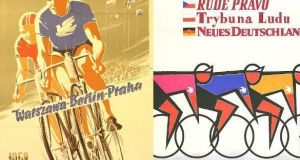 Posters from the Peace Race which started in Warsaw and ended in Prague. Photographs from Paul Smith’s Cycling Scrapbook (Thames and Hudson)

At times it is difficult to attach the term “golden age” to the sport of cycling when we consider how much of its gilding has always been corrupted by a perennial history of doping, be it alleged or well founded. One of the sport’s greatest champions, Jacques Anquetil, did once say after all: ‘You can’t win the Tour de France on mineral water’, and the eight-time major race winner was fairly unrepentant about the use of amphetamines in competition.

Nevertheless, there has always been a special radiance to the cycling era of the 1950s and 1960s. Its sepia-tinted age of continental exoticism gave a unique afterglow thanks to its innovative design, distinctive colouring, and the inherent sense of style of riders, teams, and sponsors.

The European cycling circuit then was a circus bursting with glamour, bolstered no doubt by its existence in an age before saturation television coverage of sport, or the internet’s unlimited access which can quickly burst any mythical bubbles. Instead what we have are tinted photographs, gnarled newspaper reports, and dubious record books to fall back on. Are we any worse off ? Probably not, on the final tally. Moments of Mediterranean- infused magic live long in the mind of anyone who witnessed the major races first hand in those days I imagine. Or if they have been passed down as stories through the years by the cognoscenti, they will come with welcome embellishment, no doubt.

They remain both vivid and memorable, and have an aura that bears a resemblance to the eternal magic that emanates from the likes of Cary Grant or Lauren Bacall.

Competitive cycling became widely popular, in the main, because of newspapers. The two major tours, the Tour de France (which this year starts on July 2nd) and the Giro d’Italia, were both founded as publicity stunts in the hope of increasing newspaper circulation.

The Tour was founded in 1903 by the daily L’Auto, while six years later Italy’s famous pink newspaper, La Gazzetta dello Sport, did the same with the Giro (hence its famous shirt). The Tour’s maillot jaune, created in 1919, remains the purest symbol in the sport, surrounded by so many yarns and legends.

The Giro d’Italia meanwhile – which Ireland’s Stephen Roche became the first English-speaking winner of in 1987 – has the maglia rosa to represent the general classification leader. This shirt took on extra significance a few years ago when it was blessed by Pope Francis, the same year it was designed by another high priest of sorts: the renowned fashion designer Paul Smith.

“Cycling has always been the sport for me,” he says.

“You probably won’t be surprised to learn that I was attracted by its sense of style: Fausto Coppi’s sunglasses, Jacques Anquetil’s jerseys and the beautiful graphics on a piece of Campagnolo kit have provided a regular source of inspiration for my work.

‘But there’s much more to it than that. As a child I loved the feeling of being on a bike so much that my first serious ambition was to be a professional rider. I probably wouldn’t have been good enough, even if an accident when I was 17 removed the possibility. But for most of my life I’ve admired the skill and courage of the great riders of successive generations.’

Smith was born in Nottingham, and his love of cycling was fostered by joining his local club.

Despite his career taking a different route, his thirst for the sport remains unquenched.

He has even gone as far as designing bikes for the likes of Mercian and Rapha and has a large personal collection for his own use in his offices dotted around the globe.

It’s easy to understand how the kaleidoscope of colour and design in mid-century cycling would have inspired Smith the fashionisto. In the post-war years cycling sponsors and teams or manufacturers such as Peugeot, Simplex, and Raleigh created beautiful kit, logos and artwork to match the sport’s grandeur. It’s sometimes forgotten that cyclists were the only sports people to have sponsors and logos on their kit during the 1950s and ’60s. Many companies came on board to advertise their products, from coffee to cigarettes (one advertisement draws our attention to a lighter that works in the wind when on the bike), as well as well-known drinks such as Cinzano, Martini and Dubonnet.

The super-stylish riders added a dashing air to proceedings too: Italy’s handsome Fausto Coppi for one, debonair both on and off the bike. If you go into any cafe in Italy it is likely you will find his portrait on the wall. Coppi apparently enjoyed his caffeine fix – the rumour goes he would drink 14 espressos before any mountain stage.

The language found in the old cycling publications was exotic to many ears then too – bidon, musette, peloton – and their fonts, graphics and designs had a European avant garde identity; some seemed to be thrown together in the punk spirit of the ramshackle fanzine. Some, such as Le Miroir des Sports had a more opulent look and featured elegant black-and-white photos of riders such as Coppi, framed by their national flags, which gave them an air of nobility similar to that of a Roman emperor.

Anquetil looked like he was born to be on a bike, and Smith recalls how he tried to mimic the Frenchman’s clothing and kit if possible; Smith even bought an old St Raphael clock just for its association with the great cyclist.

An amusing story relates to rider Raymond Poulidor, who was often second to Anquetil in the latter’s era of dominance. Poulidor visited him on his deathbed, where his old rival reflected thus: “My friend, you will come second to me once again.”

For the last time, Anquetil did what he said he was going to do. He crossed the finish line in the race of life, dying from stomach cancer on November 18th, 1987, at the age of 53.

Paul Smith’s Cycling Scrapbook is published by Thames and Hudson