Practitioner says it is not about decluttering, it is an Earth science 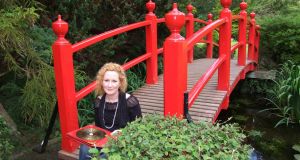 Feng shui consultant Dervilla Griffin: “I have a lovely mix of home and business clients who would generally contact me having received a recommendation from a previous client.”

We’re in the middle of the Chinese new year celebrations. The glorious son et lumière celebrations, which are rooted in centuries-old traditions and have specific symbolic meanings, bring us the sight of gently flickering red paper lanterns, chrysanthemums in the home, “mystic knot” decor items (a powerful good luck symbol), golden colours everywhere and the ritual of the famous Lion Dance, the purpose of which is to evict and neutralise all negative energy from the previous year.

Chinese people will have cleaned their homes thoroughly just before the celebrations began - it’s called “sweeping the dust” – to assure that the feng shui energy in their house is clear and fresh. Literally translating as “wind-water”, feng shui is the by now well-known Eastern philosophical system of harmonising everything with its surrounding environment. Even jaded sceptics begrudgingly accept that the principles of feng-shui – living harmoniously with nature – are “quite rational”.

For some a fad or a pseudoscience wrapped in impenetrable layers of mysticism, feng shui is impacting more and more on the western world. The recently opened Lucky Dragon Hotel and Casino in Las Vegas has been designed along feng-shui principles; a branch of McDonald’s in California has been thriving since it went underwent a feng shui makeover featuring as it does “symmetrically balanced seating in earthy tones, water features and exotic fauna”.

Las Vegas and McDonald’s – and both wouldn’t normally be known for prioritising harmonious design principles – may well be in it for the Asian dollar, as might be the big hotel and restaurant chains in the US boasting of their feng shui decor awareness but increasingly there is an awareness and acceptance of the philosophical system. The Body Shop, British Airways, Hyatt Hotels, Merrill Lynch, Motorola and Universal Studios are just some of the companies said to have incorporated the practice into design.

It is the very longevity of feng shui – it did seem to have its moment in the 1980s only to then disappear off the cultural radar – that now has an increasing amount of Irish people (albeit still very much in the minority) seeking the advice of dedicated feng-shui consultants whether buying or selling a home. And in a very competitive marketplace, marginal gains count for everything.

Dervilla Griffin is an Irish feng shui consultant based in Cork whose work takes her all over the world. Trained in Beijing, she is quick to point out what feng shui is not: “It’s not about clutter-cleaning or just shifting beds around, it’s an Earth science which is all about how our home and/or work environment can affect our wellbeing.”

For Griffin – who talks in an attractively non-mystic way – feng shui is more about the premise that “our surroundings influence our thoughts and emotions”. Far from shifting furniture around, Griffin’s work has as much to do with illness (particularly among children) and poor sleeping patterns. There has been a steady increase in the amount of “holistic” therapies – reiki, acupuncture, kinesiology etc – and in many ways, feng shui is the historical precursor of the holistic approach.

“I have a lovely mix of home and business clients who would generally contact me having received a recommendation from a previous client. They may want to improve their home environment for any number of reasons – frequent bouts of sickness, adults or children not sleeping or failing to thrive; kids not performing in school or just to improve the comfort level of their home,” she says. “Businesses hire me because they would like more foot fall through the shop door, improved sales, better employee morale, and an improvement in productivity.”

Perhaps surprisingly, Griffin has a number of musicians and writers as clients. “They want to improve the energies of their work areas to release creativity. A client in the UK hired me once to ensure balance in his home to enhance his creativity. On my findings, I was able to tell him that his creativity just so happened to be in his bathroom! He laughed and told me that he wrote his two novels from there.

She adds: “I get a lot of clients suffering from sleep deprivation. Many of your readers will be able to relate to the problem of going to bed feeling exhausted but, as soon as they lie down, they become alert and the mind becomes active. There are two main reasons for this; firstly, they are now in a different location energy and secondly their head may be positioned to their most active direction. So it’s about arranging the bedroom and furniture to balance this frequency to allow for a good night’s sleep.”

Griffin has an impressive collection of positive testimonials from Irish businesses (bars/restaurants/clothing and jewellery shops) and individuals who have used her services. She cautions that people interested in hiring a feng shui consultant should determine what style feng shui they use (western or eastern), what qualifications they have, how long they have been in business for, how many clients they have and whether they can provide references.

Revealingly, Griffin says that a lot of her Irish clients keep the fact that they have used the services of a feng shui consultant private.

Just as much as claims are made on behalf of feng shui (and some of them are extravagant) there are those who believe that it is an expensive exploitation of gullible people seeking a simple solution to complex problems. A leading US feng shui consultant, Ken Lauher, addresses this on a YouTube video on his channel entitled What To Do When Your Spouse, Friend or Family Believe Feng Shui is Nonsense.

Irish architect Eva Byrne says that we already use a form of feng shui here, just we don’t call it by that name. “I don’t think feng shui is a burning topic in Ireland – it is more likely to be perceived as a bit of an indulgence – but in regards to its principles of building, siting and design, we have our own approach in the West. We just don’t have a name for it or as strong a set of guidelines and principles, but we tackle the same issues and address them in our own way” she says.

“The principle of the art of placement really resonates with me – I tell my clients that we should think in terms of ‘placing’ not ‘putting’ furniture and other items in a room. A skilfully arranged room will have a definite ‘flow’ and sense of harmony. For myself, the energy in any home starts with the sun and how it moves around the house and its rooms. After that, it’s about room layouts and the relationships between rooms. I think the matter of how to ‘harmonise with the environment’ is one that is solved with skill and instinct”.

Feng shui is no longer confined to buildings. Many sports teams are now using its principles – rearranging their training spaces etc; on the Tour de France now, some cycling teams use feng shui consultants to travel in advance of the cyclists to ensure their hotel rooms are arranged on feng shui lines. The no-nonsense and blunt-talking retired cricketer Geoffrey Boycott raised eyebrows when he credited feng shui for helping him to beat cancer – he was advised about the direction he should face when sleeping, among other recommendations.

What was once talked about primarily in a “moving around the furniture” type of way is now best understood as a “holistic” or “alternative” method. You can read about how to use feng shui on your garden and on your car.

One unlikely advocate of feng shui is Donald Trump, who has included its principles in his hotels and real estate holdings. The “harmonising” aspect of feng shui, though, may not have been his chief consideration. “It’s just another element in which you can have the advantage over your competitors,” Trump told the New York Times back in the 1990s having called in a feng shui consultant to help with renovation work at Trump Tower. “Asians are becoming a big part of our market and this is something we can’t ignore.”

Whether it be fast-food restaurants, elite sports teams, businesses or individuals adopting the principles of feng shui for either “harmonious” or sound commercial reasons, the only thing that both feng shui evangelists and sceptics agree on is that what was once seen as New Age fad is now quickly encroaching on the mainstream. In this Chinese new year, many are expecting a breakthrough 12 months.