Dress for dinner: How tablescaping is taking mealtimes to a new level 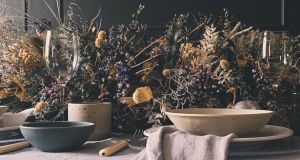 Forage branches to create a beautiful lableau and add linen. Piglet dove-grey French stone-washed linen tablecloth, 150cm by 250cm, about €92, and matching napkins, €10 each, to order from The Wedding Shop. weddingshop.ie; pigletinbed.com

“Tablescaping – setting the table at mealtimes with more than just cutlery and water glasses – is now a thing, with almost half a million hashtags given to the subject, and the reason is simple,” says event planner Tara Fay, who hosts such live events on Instagram. “It’s because everyone’s at home and they need something nice to look at. They’re coveting restaurant tabletops and want to recreate them at home.”

For social media influencers – those driving the visual traffic online – there is another reason as well. “They can’t be out and about but still have a need to post beautiful photos. Tablescaping is the easiest way to do this within the confines of the home,” says Fay.

“Dressing for dinner brings a sense of ceremony to mealtimes,” says Peter Kelly aka Franc, a household name for his appearances on TV show Say Yes to the Dress and many wedding planning programmes. He learned the art as a child from his grandparents and has been doing it ever since.

His grandfather, Charles W Henderson, was the first presenter of long-running BBC TV show Gardener’s World and his mother was a dressmaker who ran a shop. “They were very creative. You gathered round and everyone helped. Produce from the garden would be used to help create a table centrepiece.” This included tablecloth and tableware selections.

“In the era of two adults working, that art of dressing the table has been lost,” Kelly says. “There was no time.”

But with Covid restrictions forcing us to hit the pause button, the pendulum has swung away from photo-documenting our eating-out experiences in favour of dining in. So-called “good” tableware and stemware has resurfaced during the deep-clean dust-downs and declutterings that were a feature of lockdown one. Breaking bread together helps to break the day and dressing the table creates a visual sense of the feast.

Fashion is responsible too. After a decade of all-white tables, decorative dinner services, canteens of crockery and expressive centrepieces are back in vogue, according to Claire Mowser of The Wedding Shop.

For Maria Reidy, who runs Signature Rentals, a simple solution is to layer artisan potters’ plates on top of the plain white dinnerware we all own to bring colour and texture to the table. She favours Irish second-generation potters Fermoyle Pottery in Ballinskelligs, Co Kerry or Dublin 7-based Arran Street East,but also suggests mixing in pieces by Stephen Pearce or Nicholas Mosse.

At this time of year foraged twigs, flowers and ferns – anything that evokes Reidy’s native Kilmihil in west Clare – will add a wintry touch. “You can find clippings in your local park or hedgerow,” she says. “Then it’s about finishing touches, like placenames to make a point of difference. These can be handwritten or, for a celebratory meal, you could hire in-demand calligrapher Sarah O’Dea of Three Bullet Gate.”

You can use edibles like figs or artichokes set on the top plate as a placename holder – a simple nick in the flesh of either will hold the name in place. This will give the tableau a Dutch master effect, she says.

The use of cloth napkins is an easy way to up the game. “There is nothing so pleasurable as a starched napkin,” says Fay, without even a hint of irony. “I get great therapy from starching a napkin.”

And in a first world way she’s right. It’s all part of the sensory pleasure of dining in a fine restaurant, something that is relatively easy to do at home. The average French family uses cloth napkins every day. These are folded after meals and returned to a basket or receptacle, and laundered weekly.

“Affordable options can be had at JYSK, Ikea or Sostrene Grene. Or you could order some in Irish linen. A set of four from Jennifer Slattery Textiles costs €78 while singles in appetising shades like butternut and duck egg cost €20 each, from Stable of Ireland.”

Fay, Kelly and Reidy all offer expert advice on tablescaping on their social media platforms. Fay also hosts private Zoom calls where she will view the room and serveware to see how it all might work together. She’ll make suggestions and can also add any number of finishing touches, from fine taper candles that burn beautifully to all manner of votives and placename paraphernalia.

Be sure to include real candlelight, is Kelly’s advice. He finds it calming and mood-transforming. It also flatters the face and veils a multitude of sins, from walls that need new coats of paint to curtains that have seen better days.

Helen James’s tablescaping philosophy is rooted in the everyday. “The idea of good plates feels outdated,” she says. “Your everydayware should be beautiful.” It’s a belief system that has percolated down to her sons, who range in age from 11 to 21 and who now follow her lead when setting the table for meals.

“The other night my eldest took the flowers from the mantelpiece to put at the tablecentre, lit a candle and put down place mats. All unprompted,” says the proud mother of three whose Considered range is available at Dunnes Stores.

“It’s about creating an everyday sense of occasion, even if it’s only ordering takeaway on a Friday night,” Fay says.

Raid the cupboards and presses and allow for improvisation. If you don’t have a fashionable velvet tablecloth then a velvet bedspread will work – if you own such a thing. Make serveware and stemware multi-task. Champagne coupes, martini or margarita glasses will work for pre-dinner drinks and for dessert. Your bubble will thank you for it.