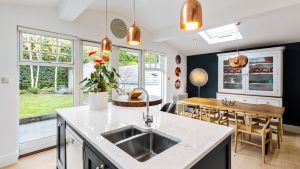 It has been slim pickings for househunters in Ranelagh lately with little coming on the market on the densely packed redbrick streets branching out from the popular Dublin 6 village.

Number 5 Beechwood Avenue Lower, which is now for sale, last had a sales board on its railings in 2012 when, in a sluggish market, it sold for €665,000, a figure slightly over its asking price.

The vendor bought the house when it had already been updated and extended with a single storey extension to the rear but she quickly embarked on a major renovation programme that included installing a smart new kitchen, updating the bathroom and shower room and reworking the open-plan area downstairs, shaving some space off the utility room to make the eat-in kitchen bigger.

As well as insulating the property the works included a new double-glazed sash window in the front room and new patio doors to the rear. Decoratively, every room has been refreshed including repainting, new carpets or other flooring such as the limed oak in the kitchen and the Fired Earth tile in the bathroom, so new owners will probably be happy to leave all as is.

A key selling point in this style house is always the front living room which enjoys the proportions – including strikingly high ceilings and period features – of grander Victorian houses. That’s off a wide-entrance hall with decorative plasterwork. Down a few steps there is a further, smaller, living room – it could equally be used as a third bedroom but in its current use it is a more informal living room than the one to the front. An adjacent shower room further opens the possibility of using this downstairs room as a bedroom.

Upstairs there are two large double bedrooms, both with built-in wardrobes, and a bathroom.

That room – bright because the rear of the house faces south westerly – is fitted with dark painted timber units topped with gleaming white polished stone worktops and fitted with Fisher & Paykel appliances. The roof lights were replaced by the owner with electric Veluxes.

Both the rear and front garden have been landscaped and there is side access. Parking is on street which can be tight.

John Malone: The US billionaire buying up Ireland