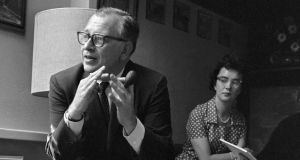 Finish designer Eero Saarinen’s (1910-1961) “Tulip table” is one of the most copied 20th-century designs, which probably accounts for its recognisability. Although all those anonymous Georgian-era furniture makers who made countless pedestal tables might consider that the designer who spent his working life in the US – he studied with Charles Eames in the famous Cranbrook Academy – owes them a nod of recognition.

Launched in 1958 by US maker Knoll as part of an entire “Pedestal range” – with tables in many sizes and variations of matching chairs – the space age design is defined by its sleek sculptural base which in white looks plastic but was in fact aluminium with a white plastic coating.

Saarinen said he explored the single-pedestal option as an alternative to the more usual four-legged tables and chairs because “I wanted to clear up the slum of legs”.

The tables are now available with many top options – from plastic to marble. Crude copies incidentally tend to have the top attached to the base with visible screws – the Knoll versions, like Saarinen’s original design, don’t. And in his short life – he died aged 51 – Saarinen became a titan of 20th-century design.