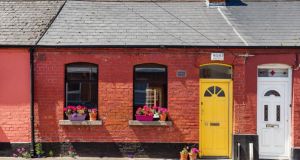 Small can be beautiful. It’s more environmentally friendly in that there’s less space to heat and light, and demographic trends indicate that homes need to scale back in size.

Two-thirds of households added to those in Ireland since 1996 comprise one to two persons so it’s logical to pursue something on the small side.

A house in Dublin’s north inner city offers a masterclass in simple hacks on how to live within a small space.

The terraced cottage off Dorset Street was originally a two-bedroom home but it’s been opened up to make the most of its footprint. Its owner lived in the house for two years after purchasing it in 2015 before deciding to carry out extensive works aimed at making the cottage feel larger. She decided to knock down the wall between the sitting room and the second bedroom and this has transformed the place.

The sitting room used to feel like a corridor and wasn’t big enough to fit a sofa, she recalls. Now she can accommodate a roomy velvet L-shaped sofa against the party wall. The room is also brighter thanks to its double windows to the front.

The simple layout change means she also has space for a proper dining table, which she bought on adverts.ie. The chairs that surround it belonged to her grandparents and had been hanging from rafters in her parents’ garage in west Limerick. A neighbour helped her to paint them.

The ceiling heights, about 3.4m high in the original part of the property, help to make the house feel bigger than it is because of the extra volume above your head.

The bedroom is set to the rear and instead of built-in wardrobes she elected to go with a pretty French-style, free-standing unit that holds everything she owns. Purchased in a vintage store in Phibsborough she had to take off the front door and bedroom door to get it into the room.

She also uses the space under the bed to store stuff – some homeowners opt for an ottoman-style bed to keep additional bedding, linen, pillows and even suitcases.

In the kitchen, housed in an extension, she chose open, above-the-counter shelving to showcase her spices, tableware and Mexican pottery. She’s not a fan of doors in such small spaces as they just make it feel more enclosed, she says.

In the small, west-facing yard there is a block-built shed that is plumbed for a washing machine and deals with the issue of drying laundry, while the Moroccan tiles on the wall, from Best Tiles, add a pop of colour and chime with the wrought iron bistro set that was a present from her mother. With only single storey houses to the rear the yard is light-filled.

Number 55 St Joseph’s Place, off Dorset Street: The property, which measures 52 sq m/559sq ft is sizeable for one person and is asking €295,000 through agents SherryFitzGerald.

Open shelving
In small kitchens open shelving means easier access and less stretching and crouching to get into cupboards. The downside is that it can look cluttered and all the items on show are prone to getting covered in dust or cooking grease. This selection of kilner jars and others, below, is from Marks & Spencer and is smartly styled with a herringbone pattern tiled splashback in a rich moss green.
marksandspencer.ie

Versatile furniture
Accent furniture needs to work really hard in a small space so a night stand that can double as a laundry basket or a magazine and newspaper repository, such as this one below from Melody Maison, about €128, makes sense. In the living room it can be a coffee table that has additional storage.
melodymaison.co.uk

Fold-away bedding
Keep blankets, bed linen, extra pillows and duvets out of sight in an ottoman storage bed. The Malmesbury from Willow & Hall, seen below in Shadow grey, is one of a wide selection of the genre available. It costs about €1,583, ex delivery. Ikea sells a really affordable range including its Balestrand, €330 for a double, which has two concealed drawers.
willowandhall.co.uk
ikea.com

The Roscommon man who became a sumo wrestler in Japan
9