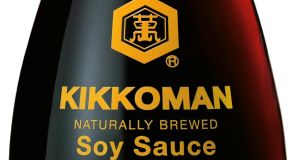 Kikkoman soy sauce bottle has a heavy base for stability, unobtrusive lettering and a delicate neck topped with a red plastic cap

A holy grail in packaging design is longevity, and instant recognition – whether that is by colour, shape, or material. The Kikkoman Soy Sauce bottle fulfils all that criteria. It was designed in 1961 at a time when cooking in the United States was becoming more international and diners were prepared to experiment.

The long-established Japanese food manufacturer had moved into the US where Japanese food was becoming popular. One of its key condiments, soy sauce, came in giant vats and Kikkoman commissioned Japanese industrial designer Kenji Ekuan (1929-2015) to create a small bottle that could go directly on the table. Three years and 100 prototypes later, he was happy with the curved glass bottle that is reminiscent of sake bottles.

It has a heavy base for stability, unobtrusive lettering and a delicate neck topped with a red plastic cap that dispenses just enough sauce without dripping on to tablecloths or messily down the bottle. The internal shape of the cap prevents the sauce from clogging.

The company logo – a tortoise shell, a symbol of longevity – sits in a gold hexagonal frame. The bottle’s functional design and aesthetic appeal fulfilled Ekuan’s own motto “Design is a source of life enhancement” and earned it a place in the Museum of Modern Art in New York. By the time of his death, more than 300 million Kikkoman soy sauce bottle had been sold.

Coronavirus and carers: ‘I am so scared right now’
4