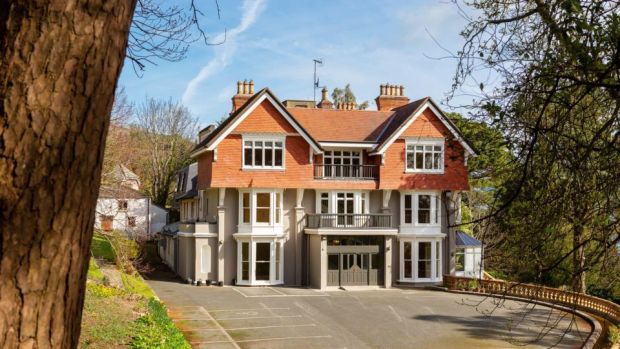 Tucked away at the top of a sweeping tree-lined drive on the side of Killiney Hill, the Grove ticks many of the boxes for a high-net-worth individual shopping for a stately home. Period home with strong provenance – check. Rolling parkland grounds – check. Sweeping sea views – check. Close to Bono’s house – check.

It’s a slam-dunk, surely. But, as even the buyer of the most modest of homes will understand, what checks out on paper may not always deliver in reality – immediately at least. Sometimes there has to be a leap of faith. And this is the way with the Grove, a Victorian home dating from around 1840 on just over two acres of wooded grounds, on the market through joint agents Knight Frank and Hooke & MacDonald seeking €4.5 million.

From modest enough beginnings as a hunting lodge, it has been improved and embellished over time with second and third storeys added – and even a theatre added to the rear at one point. It has been a much-loved family home, but in its latter day incarnation as a nursing home from the 1980s, the Grove somehow lost its way.

Any serious buyer will be knocking half of the property, an unsightly three-storey bedroom block bolted on to the rear of the house in the 1970s

So while the brochure boasts a sprawling 1,490sq m (16,041sq ft) of floor space, any serious buyer of this property will be knocking half that because much of it comprises an unsightly three-storey bedroom block bolted on to the rear of the house in the 1970s.

Niall Murray from Rempress Holdings, owner of the the Grove nursing home, has gone to great lengths – and some expense – to minimise the property’s latterday role as a care facility and showcase some of its finer features. In fact, he seems to have fallen a little bit in love with a property that for years languished while its grounds have risen up around it.

Now all of that has been cut back, trees felled – though not all – and hundreds of bulbs planted to revive the spirit of the place when it was a bustling family home. James O’Mara and his wife Agnes took ownership of the Grove in 1925. A businessman from a prominent Limerick family and a key nationalist member of the first Dáil, O’Mara joined Éamon de Valera on a fundraising drive to the US in 1919. He is probably best remembered for introducing a Bill which made St Patrick’s Day a national holiday in Ireland.

The Grove was owned by the O’Mara family until Agnes’s death in 1958. Murray met with some of the grandchildren to piece together what the house was like in its heyday. They recall guests being entertained in the purpose-built theatre and billiards room at the rear of the house – the family had a strong operatic connection – and playing by a large pond on the west side of the house fed by freshwater streams running down the hillside.

The L-shaped house pivots on an east-west axis, allowing the property to bask in day-long sunlight. The striking decorated stone balustrade to the front edges the east side of the property, and a wide original terrace links with some of the main reception rooms.

Sadly, the porticoed entrance that would have been original to the Grove was boxed off to create a more serviceable reception area for the nursing home. Inside, the interiors reference the Arts and Crafts period, with an original arch in the staircase hall featuring a rose and shamrock keystone. To the left of the hall is the diningroom with bay window, mahogany fireplace and an alcove housing a lone walnut piano.

To the right of the staircase hall is a lovely, warmly lit morning room, also with bay window, fireplace and access through to an octagonal conservatory providing super views across the grounds and on to Killiney Bay. Sadly, the original woodwork was replaced with an unsightly uPVC frame, which will need to be replaced.

To the rear of the ground floor are interconnecting drawingrooms, one with an intricately carved oak fireplace, while the other features a highly unusual inglenook, or recessed cherrywood fireplace. Along with stained glass friezes in the top panes of the bay windows representing the Arts and Crafts disciplines, there’s a distinct ecclesiastical feel, not dissimilar to St George’s, an exemplary Arts and Crafts home located adjacent to the Grove off St Georges Avenue.

Upstairs, over two floors, is a further arrangement of bedroom accommodation, quite different from the original layout. It would be easy enough to remove interior walls and knock together en suites here and there to reinstate the originals. Even as is – and there is no escaping the distinctly institutional feel of this place – sunlight pours into these rooms and the sea views are lovely.

This property really is something of a conundrum. What has happened to it in recent years is a shame that won’t add to its appeal for any buyer. Aware of this, the vendors have reached into the past to revive this protected property’s “best bits” and put her best foot forward for sale.

“This has been a fantastic journey bringing the house back to where we felt it was, and at the same time preserving the original grounds. We wanted to respect the history of the building, bring it back to what it was in the 1920s. Had we more time we would have done more,” says Murray.

Adjacent to the main house in the old walled garden they have also secured full planning permission for a five-bed detached house of 292 sq m/3,143 sq ft. It’s not really clear why. Presumably it will add further value for any buyer. What is clear is that whoever buys the Grove will need exceptionally deep pockets, and there is precedent for same just a few hundred yards further down the hill at Strathmore. The nine-acre former Canadian embassy residence purchased by entrepreneur Joe Elias for €7.5 million in 2015 has been screened from view for months as it undergoes what has to be one of the biggest domestic renovations in the State. When complete that Victorian mansion will have been transformed to a nearly 20,000sq ft property, bigger even than Bono’s house located across the road. The Grove’s next chaptermay be just about to begin.