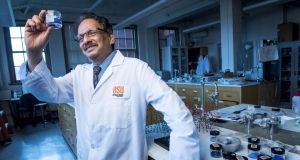 Blue is a colour that has deep cultural cachet, while being nearly impossible to find in nature. The blues that abound in nature, a butterfly, a navy beetle, even blue eyes, are not natively blue, according to scientists, but instead are reflections of light, the impression of blue.

Since antiquity, blue has been associated with rarity and expense. Ultramarine, a pigment originally made from grinding lapis lazuli, a semiprecious gemstone, was once worth as much as gold. Today, our blues are created by chemists in labs. But that doesn’t mean creating new shades is easy or common.

Before 2009, when a team of chemists at Oregon State University developed a colour now known as YInMn Blue, it had been 200 years since the last inorganic blue pigment – cobalt – was created.

Now, YInMn Blue is available to artists as a paint and for commercial use. It has a home in the archive of the Forbes Pigment Collection at Harvard University, and has even inspired a Crayola crayon, a striking shade called “Bluetiful”.

The shade was invented by Mas Subramanian, a professor of materials science at Oregon State University, who was working with a team of graduate students to develop an inorganic material that could be used for electronic devices. When a sample he had put in the furnace came out a vivid, vibrant hue of ultramarine, Subramanian said he realised “the brilliant, very intense blues” were like nothing he had seen before, and would be better suited to use in paint than on pieces of technology.

The blue proved stable, but it could also be slightly altered to get variations in hue.

“We decided, ‘okay, this is interesting for the pigment industry,’” Subramanian said.

The name for the new blue is derived from its chemical components’ symbols on the periodic table of elements: yttrium, indium and manganese. The beauty of YInMn Blue is that it is not only able to be widely duplicated via Subramanian’s formula, but it is also non-toxic, making it safer to use and perhaps more eco-friendly too. Cobalt, on the other hand, though a boon for 19th-century artists, turned out to be extremely toxic. – New York Times