Cufflinks, tie-pins, watches and a diamond and sapphire brooch for the more daring 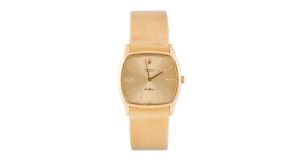 O’Reilly’s of Francis Street Fine Jewellery auction, which will take place in an online sale this Wednesday, February 24th, features a number of lots of interest to men.

Until Victorian times, men adorned themselves with jewellery as much, if not more, than women but their jewellery was rooted in functionality.

Pirates wore big gold hoop earrings, not as a fashion statement, but as insurance should their body be washed up on a shore, where the gold would pay for a decent burial.

Even gunners wore earrings, the function being that they held earplugs which were inserted as cannons fired to protect their hearing. Intaglio or signet rings were used as wax seals as well as to indicate position in society in ancient Rome.

Egyptian men believed that jewellery attracted the attention of the gods, so the more they wore, the better they stood out among their peers. In royal circles, jewels meant wealth and a symbol of power. Henry VIII had no less than 234 rings along with 324 brooches in his collection, and Sir Walter Raleigh’s matching pearl earring and droplet that he wore on his cape, feature in most of his portraits.

But perhaps the ‘king of bling’ title goes to Maharaja Sir Bhupinder Singh of Patiala, who in 1928 commissioned Cartier to create a five-tier diamond and ruby festoon necklace. It was made from Burmese rubies and almost three thousand diamonds including a cushion-cut 235 carat yellow diamond, which the 34-year old wore together with diamond brooches and earrings.

Known as the Patiala Necklace, it disappeared from the Royal Treasury in 1948, and reappeared in bits and pieces three decades later. It is estimated, that if in its original form today it would be worth in the region of €25m.

Two really lovely lots are 149, which is an incredible gem set bracelet with sapphires, rubies and peridot (€3,300–€3,800) and lot 138, which is a smashing art deco diamond and emerald brooch (€5,000–€7,000) of which Maharaja Sir Bhupinder Singh would most certainly have approved.