Arts&Antiques: Hollywood vision of Ireland on offer in collectors’ sale 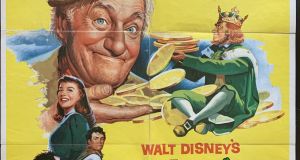 Though mostly binned after the final credits have rolled, cinema posters have become valued items for collectors, with some achieving astronomical prices in recent years.

The highest price fetched at auction to date was for an original three-sheet German/international poster for the Fritz Lang classic Metropolis, for which actor Leonardo DiCaprio paid $690,000 in 2006.

From its salesrooms in Castlecomer – which ironically is located in the old Deen cinema – Fonsie Mealy’s collectors’ online sale on Wednesday, March 3rd features some old favourites.

Lot 648 (€100-€150), is the promotional poster for Walt Disney’s 1959 production Darby O’Gill and the Little People, portraying the simple tale of an old man’s battle of wits with the King of the Leprechauns, starring Janet Munro, Albert Sharpe, Jimmy O’Dea and the then little-known Sean Connery.

While filled with paddywhackery, cliches and a theme tune that is hard to get out of your head, this film helped catapult Connery into his eventual role as James Bond, where he played fictional agent 007 seven times in the adaptations of Ian Fleming’s novels.

After a foray into the worlds of football and bodybuilding, Connery was cast as Michael McBride in the film, and, despite being described by the New York Times as “merely tall, dark and handsome”, he caught the eye of Albert and Dana Broccoli, who were looking to cast a young unknown in Dr No.

At the time, Fleming wasn’t convinced, describing Connery as “an overgrown stuntman” but was persuaded by his then girlfriend Blanche Blackwell, who remarked that Connery had the requisite sexual charisma. In a statement by James Bond producers after Connery’s death last year, Barbara Broccoli said that he had “revolutionised the world with his gritty and witty portrayal of the agent” and was “largely responsible for the success of the film series”.

Other Irish film posters include The Field, where Richard Harris gave one of his most outstanding screen performances as the Bull McCabe (€60-€80); David Lean’s Ryan’s Daughter starring Robert Mitchum, which is accompanied by nine photographs from the set (€200-€300); and a French poster for L’Homme Tranquille (The Quiet Man) with John Wayne grabbing a tempestuous-looking Maureen O’Hara by the hair (€200-€300).

For fans of Irish artist Harry Clarke, lot 376 is an untitled study for Edgar Allan Poe’s Landor’s Cottage. The final artwork of this was published in Poe’s book Tales of Mystery and Imagination – a copy of which is included. One of Clarke’s most expansive illustrations, Landor’s Cottage was exhibited at the Royal Hibernian Academy exhibition in 1920 (€1,200-€1,600).

On February 27th, Sean Eacrett will hold an online sale of 900 lots. The highlight of the sale is lot 634, an early 20th-century Chinese Chippendale-style cabinet that Eacrett estimates could fetch up to €5,000, as he thinks that it could be by Hicks of Dublin.

“It’s not signed by Hicks, but that was common at the time; but it has all the features of the middle-generation Hicks cabinets.”

Another piece that will be of interest to collectors with a penchant for horology is a lovely 19th-century watchmakers’ cabinet with ivory knobs (lot 125, €100-€200).

Art includes works by Con Campbell, a number of watercolours by Isobel George and what Eacrett describes as a “chancy” lot: an 18th/19th-century coloured, unframed engraving on paper laid on canvas, with the signature E Landseer.

“If the provenance is correct it could be worth about €1,000,” Eacrett says, as it is thought to be by Sir Edwin Landseer.

February 28th marks the start of Hegarty’s sales in Bandon, Co Cork. Highlights from the online sale of furniture, jewellery and collectables include a lovely vintage yellow sapphire and diamond ring (lot 7, €5,000-€7,000). There is also a wonderful matching pair of 19th-century mahogany-inlaid cutlery urns.

Explaining their estimate of €8,000-€10,000, Nóirín Collins of the auction house says: “These would have been used in the ‘big houses’ to store and protect the family silver. Each has a locking escutcheon to the front and, apart from how unusual it is to find a matching pair, they are also beautifully designed.”