Take5: From a three-bed in Dún Laoghaire to a hilltop hideaway in Costa Rica, five apartments in Croatia or an island in South Africa 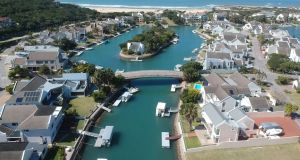 Lady Hamilton Island is situated between two tidal canals within walking distance to the beach.

This three-bedroom house at 47 St Patrick’s Crescent in Dún Laoghaire is in superb order and extends to 87sq m (936sq ft). One of the benefits of the property besides its location – close to amenities and the Dart – is the rear garden, which is almost 11m (36ft) long.
Price €450,000
Agent DNG

Your very own island with two deep water jetties, a swimming pool, tennis court and a well-established garden might tick a few boxes on a bucket-list home. Coming with a small cottage and set in Royal Alfred Marina, Lady Hamilton Island is situated between two tidal canals within walking distance to the beach. There is huge scope to develop the 3,863sq m (41,581sq ft) island into a real dream home.
Price 8,495,000 South African Rand (€462,175)
Agent savills.com

Sleeping 22 people, this property overlooking the water in Croatia consists of five apartments occupying 380sq m (4,090sq ft) that have an established summer rental income of €300 per night for four apartments (allowing the owner reside in the fifth). Constructed in 2011, and renovated in 2020, balconies have super sea views over the nearby shore and sandy beach. The property, which has a pool, is just 20 minutes from Split.
Price 5,000 Norwegian Kr (€481,126)
Agent For sale by owner on finn.no (Ref: 175145228)

This detached property extends to 580sq m (6,243sq ft) over four floors in a residential building situated in a quiet part of Ostrava, which is the third-largest city in the Czech Republic. It is laid out as three apartments, offices and storage, and has a rental income. Ostrava is known for its universities, theatres, the arts and architecture, with most of the buildings designated a protected heritage zone.
Price 12,405,000 Czech Koruna (€476,440)
Agent knightfrank.cz

Located just a 35-minute drive from both the world-class beaches of the Central Pacific and the capital San José, this centrally located property has the best of both worlds. Perched on top of a mountain, allowing dramatic views and evening sunsets from the large pool terrace, the house has three bedrooms and extends to a generous 325sq m (3,498sq ft) with high-end interiors. It sits on almost an acre and a half, surrounded by trees attracting a host of colourful birds in this little country which contains 5 per cent of the world’s biodiversity.
Price $580,000 (€477,860)
Agent sothebys.com

Sandymount semi for €1.3m is ready to move into