Building the dream home: I looked at loads of houses and thought the prices were crazy 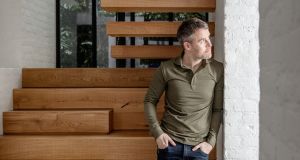 Architect Declan O’Donnell in the home he designed for his family.

Setting your sights on a custom-built A-rated home, within Dublin’s city limits, is no mean feat. But then architect Declan O’Donnell has always loved a challenge, and in designing and building his own family home he has a sleek space that is both future-proofed and baby-proofed.

We’ve all spent time online on property portals, escaping the everyday and dreaming about the different life should your Lotto numbers come in, but the more you look, the more the Dublin housing stock for sale looks the same. For those looking for something different, the dream is to build a home that is just right for the way we want to live in a Goldilocks way.

For O’Donnell, this is a 10-year-old wish come true, one that he had saved for, all the while building up his award-winning practice, ODKM Architects, and transforming the wishes of others into their dream home realities.

His home-hunting started like it does for most of us. “I looked at loads of second-hand houses and thought the prices were crazy, especially as I would be inheriting other people’s bad spends.”

So he set his sights a little higher. “I do this for a living. I knew how to be economic with design and with materials. It was a bit of a pipe dream to find a site and build something from scratch.”

Within six months he had found a side garden at the end of an estate in Castleknock with direct access to the road. “There were building lines to consider but it was surrounded by mature trees so 90 per cent of its landscaping was already done. Their maturity allowed me to build close to the boundary wall. Crucially, the back was south-facing so I knew I’d have a lovely garden.”

O’Donnell has designed all kinds of homes and says that building can cost anything from €2,000 to €5,000 per sq m, depending on the level of finish. At present there are more than 80 sites listed within Dublin county on property portal MyHome. Prices for anything within the city limits that has planning permission start from about €200,000 to the sky’s the limit; one on Foxrock’s Hainault Road, with planning for a five-bedroom detached house on 0.27 acres, for example, is seeking €1.295 million.

What O’Donnell’s approach has delivered for him is the holy grail in modern living; an A-rated, brand new, custom-designed home of 210sq m, for somewhere in the region of €700,000-€800,000 if someone without his expertise and access to trade and professional services were to take on the task.

Anyone who has been shopping in the second-hand market will know that a project of this size with such a Ber rating and within the city limits is a hard find. But he makes it sound easy.

“Architecture is a discipline where you tend to reason things out, where you’re quite objective and resolve whatever series of problems a client has. There is a reason for everything you do and suggest to the client. When you’re the client, you have to figure out what it is you actually like.”

Colour played a big part in the design, the influence of Declan’s wife, Judith Byrne, head of marketing at Dulux Paints Ireland. The house is split level, opening into a hall with a courtyard to the left. Down a set of steps is a room in use as the TV room, but could also work as a fourth bedroom in the future. Byrne’s influence is apparent in its rich rhubarb coloured walls, where artwork by Tim Climent and Alice Fitzgerald hang, and underfoot is a rug featuring a design by stained-glass artist James Earley for Ceadogan.

“Choosing strong colours was the easy part,” O’Donnell says. “It was a different story when it came to selecting the neutral tones.” Much of the interior is done in a tumbled redbrick painted a soft chalky white. This “colour” took the couple about five hours to select. “There were so many subtle differences between each shade. Many looked blue or yellow when painted onto the walls. Even with all our expertise it took a lot of work to get it right.”

That’s work most of us would run a mile from rather than spend more than half a working day considering the right shade of white. But the resulting effect is soft and warm.

It seems fitting in a way to hear that the couple met at the Ideal Homes Show in 2009, when Belfast-born O’Donnell was fresh off the boat from stints at Foster & Partners in London and in Australia and had just set up shop, literally in a shop, in Terenure village.

He had grabbed the chance to discuss colour at the show. Judith was manning stands for paint company Dulux and perplexed by, as he puts it, “the guy in red jeans and flowery shirt who kept sending all the visitors to her stand to invest in a soft white when the company was advocating the use of colour”. On the last day he stayed around to help break down the stands and asked her out for a drink.

The couple lived together in an apartment at Clancy Quay and loved its proximity to the Phoenix Park, where they used to cycle, run or walk. This made Castleknock really appealing as an area to live in.

The staircase is big and grand, says Declan. The sawn finish timber structure is a social staircase, he says. “The first flight of staggered steps also serves as a place to sit down and put on your outdoor shoes or place a potted plant. The second flight is pure cantilever and the result of a whole load of trades.”

The kitchen, fabricated by Dean Cooper, is designed “like an alter”, with a full backdrop of presses. It has swathes of smoked glass and smoked mirror that conceal cupboards for glassware and a bar. The island is clad in a walnut look, thermal pine timber by Egger, that is durable enough to withstand constant opening and closing by their toddler Maggie. A six-ring hob and under-counter extractor was part of an appliance package from Miele.

The living area is to the rear. The double-height space is home to that most mid-century of design tropes, the conversation pit, which has back and seat cushions, measured properly so they all stay in place, and supplied by Dublin Leather Store.

“It gets dog’s abuse from her ladyship,” he says, of his 18-month old daughter, who was born in the middle of the build and delayed construction by about eight weeks. “It also works as a playpen. Most of the week it looks like a bomb hit it.”

The space is home to several side tables, including a black lacquered Ottowa table by Bo Concept that overhangs the sofa and is the perfect place for a glass of wine at weekends.

At the top of the steps is an open fireplace, designed pre-baby, and for now a roaring fire is an adult-only pleasure.

The dining room has a marble-look pedestal table from CA Design. Surrounding it are timber chairs by Alan Meredith Studio, one of several Irish designers whose work features in the house. The steel frame carvers are by Jan Lennon of Hyde Interiors. She also did the sideboard.

Barry Archer of Wedge made the desk and shelving unit in the home office where one of Daniel Holfeld’s photos hangs. Archer also did the laser-cut timber privacy screens for the couple’s en suite bathroom, whose fixtures were supplied by TileStyle. Cleverly secured using Velcro, they can be easily removed for cleaning.

Above the kitchen is the main bedroom, where glazing frames the tree canopy and at night artificially lit trees fill each window. In several of the rooms, including baby Maggie’s nursery, the ceilings have been treated as though they were a fifth wall and painted in a strong hue. After dark, these rooms light up in different blocks of colour.

Patience is a great thing, he says. “I’ve been waiting a long time to do this. We weren’t fussy where we were going to live. Although I was a first-time buyer, my wife was not so we couldn’t avail of the first-time buyer grants. We have, however, been saving for 10 years, advice a mortgage adviser gave me a decade ago.”

Their Castleknock home this week won an Institute of Designers Ireland Award in its Residential Interiors category.