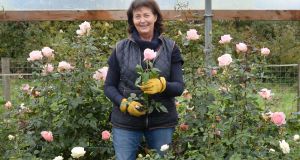 Susan Lynch working on her roses which are still in flower in the polytunnel at her home in Oldtown, Co. Dublin. Photograph: Alan Betson

The florist and specialist grower Susan Lynch can’t remember a time when she didn’t love roses. Her earliest childhood memories are filled with the sight and smell of them flowering in her parents’ garden in Glasnevin and later in Skerries – “those amazing colours, that unforgettable perfume” – as well as of visits to the National Botanic Gardens – “a childhood haven” – where their soft, ruffled blooms filled the summer air with their distinctively sweet, spicy scents.

When she and her architect husband, Ben, moved to north County Dublin, close to Oldtown as a young couple in 1997, one of the first things that Lynch did was to plant a hedge of Rosa rugosa ‘Blanc Double de Coubert’ in their large country garden.

“It’s still there, growing happily away. So is the lovely Rose ‘Graham Thomas’ given to me by a kind neighbour soon after we moved here.”

In 2009, when the economic crash abruptly put paid to Lynch’s work as a garden and landscape designer, it was that same deep love of roses that led to her new career path as a specialist cut-rose grower.

“It was my late mother Mabel, a brilliant gardener, who really encouraged me to give it a try. We were chatting together, bouncing ideas back and forth, when I mentioned that I’d love to grow proper, scented, garden-style roses for Irish florists to use instead of the conventional kinds of florists roses that have little or no perfume and are shipped long distances from other countries. Straight away she said ‘What a great idea!’ and insisted on giving me the seed money to get the business started. I couldn’t have done it without her.”

Unsure as to the best varieties to grow for cutting, Lynch reached out to Cants, the family-owned British nursery that prides itself on being “the oldest-recorded rose growers in the UK”. With thousands to choose from, the nursery helped her to narrow down her selection based on a list of criteria that included beauty, good disease resistance, vigour, floriferousness, a decent vase life, stem length and, of course, a strong perfume.

In the autumn of 2009 Lynch made what she describes as her “first rose tour”, travelling to the UK to select 600 bare-root rose plants from Cants. Delivered the following February, she laboriously planted these out by hand into a 5 1/2 acre former horse paddock next to her home with the help of friends and family.

A few years later she travelled to the UK again to visit the rose farm of Rosebie Morton, the ground-breaking English cut-rose grower whom she cites as a constant source of inspiration.

Fast forward to 2020 and Lynch’s own thriving rose farm, the Vintage Rose Company, is now home to more than 2000 productive rose bushes. Meanwhile that initial shortlist has grown to include more than 35 different varieties, some of which she grows under cover in her new, giant 50m x 9m polytunnel as a means of ensuring that their delicate blooms are protected from weather damage.

Along with Cants, the plants have been sourced from a variety of growers and wholesale nurseries and include varieties from some of the world’s greatest rose breeders including Meilland, Harkness, David Austin and Stevens.

Much sought after by leading Irish florists, Lynch’s roses have played a starring role in countless Irish weddings and seasonal bouquets, including many that she’s worked on herself as part of her own floristry business.

“I’ll always remember the lady who told me with tears in her eyes that she hadn’t smelled the perfume of garden roses since she was a child, and that she’d completely forgotten how beautiful it was . . . ”

Their scent and natural beauty aside, roses have a reputation for being difficult when it comes to effectively managing a wide range of pests and diseases. How does she control these? While most conventional rose growers reach for a battery of fungicides and insecticides, Lynch prefers to use a range of environmentally-friendly options.

“There’s no doubt that roses can be challenging to grow well in our cool, damp climate, which is one of the reasons why I prefer to grow certain disease-prone varieties under cover. Some of the loveliest – for example, ‘Rosa’Abraham Darby’, ‘Margaret Merril’ or ‘Honey Dijon’– really need those sheltered conditions. Yet even that comes with its own particular set of challenges, where you’re simply swapping one set of pests and diseases for another.

“But rather than spraying our rose plants with nasty, environmentally-harmful chemicals, we do everything we can to create the optimum growing conditions to promote vigorous, healthy growth and the generous production of beautiful blooms.

“So we prune the plants back hard in late winter/early spring, mulch them and then give them a slow-release granular feed (Vitax Q4 or the vegan-based OPF plant food), making sure to remove all the prunings to avoid the risk of common rose diseases spreading to the new growth.

“While the plants are in active growth, we use a range of health-boosting, disease-fighting, natural foliar feeds, sprays and soil drenches including liquid seaweed, neem oil, Uncle Tom’s Rose Tonic and Uncle Tom’s Natural Soft Soap. We’ve also learned the importance of controlling weeds as they can harbour a range of pests and diseases.”

Asking Lynch if she has a favourite rose variety is a bit like asking a parent if they have a favourite child. She hesitates for a moment before cautiously answering.

“They’re all so beautiful in their own way. But if I had to single one out for growing under cover, it would be ‘Prince Jardinière’, which has the most beautifully-shaped flowers the colour of marshmallows. For growing outside, it would have to be ‘Chandos Beauty’. It really is the perfect rose.”

This Week in the Garden
Avoid the spring rush and any potential delays or disruptions caused to supply chains by Brexit and the pandemic by ordering seeds this month. Recommended Irish suppliers include brownenvelopeseeds.com, greenvegetableseeds.com, irishseedsavers.ie and seedaholic.com while recommended seed suppliers in the UK include chilternseeds.co.uk and kinsgseeds.com

As long as the ground isn’t waterlogged or frozen, November is a great time to plant a hedge. For ease of planting as well as the fact that they’re much cheaper and more environmentally friendly, bare-root young plants or ‘whips’ are ideal for this.

Rather than digging individual planting holes, start by digging a trench roughly 25-30cm deep and 60-90cm wide, removing all weeds as you go. To encourage healthy growth and quick root establishment, work some well-rotted farmyard manure and/or garden compost into the excavated soil.

Position each plant to the correct spacing (see rhs.co.uk for a guide to this) and then gently spread out their baby root systems along the base of the trench. Backfill, making sure that the finished level of the soil matches the original planting line on the stem, and then gently firm the soil down around each plant. Water if the ground is dry.