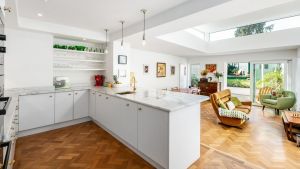 From the outside, number 57 Patrician Villas looks like many estate houses of a certain vintage. Located just off Stillorgan Park Road, this development is well-served by manicured greens, its own community centre and orchard, and safe N11 underpass access to the shops and amenities in Stillorgan village,

Concrete-built, it was purchased in 2006 as a three-bed property with one room to the front and a kitchen the width of the house to the rear but it was thoughtfully extended and remodelled by Bright Design Architects four years ago.

The house still retains two reception rooms downstairs, a small living room to the front where you can shut out the world by closing the pocket door, and a large, split-level space to the rear. Here ceiling heights range from a standard 2.4m in the U-shaped kitchen where a marble-topped peninsula doubles as a breakfast bar, to 3.4m in the living area where clerestory windows bring in southern and western light. Underfoot is reclaimed parquet flooring set out in a herringbone pattern, save for a brickbond border in the kitchen.

The white units have brass knobs and large presses – including those concealing the fridge freezer and a double-door pantry – are set into space under the stairs. In the hall, the noisy white goods are located in a tiled cupboard with clever cut-out doors to allow ventilation.

The new layout facilitated the addition of an internal boot room that leads through to a shower room, giving the house a valuable second washroom. Its walls are papered in House of Hackney’s (HOH) Palmeral, a tropical depiction of palm leaves featuring vivid greens and golds. The owners took these colours as their palette to decorate the property, going as far as asking Dublin-born HOH founder, Frieda Gormley, for the exact RAL colours used in the wallpaper design, information that she generously imparted.

The kitchen is accessed via another pocket sliding door and steps down into a large square dining-cum-living room.

Sliding doors open out to a small granite-paved patio that steps up to a lawned, southwest-facing back garden. This extends to 17m and is home to a couple of sheds, one a former pigeon coop, where the couple store their kayaks, surf and paddle boards. There’s also a zip line, a Christmas present to one of the owners’ daughters.

The risers on the stairs are painted in one of the HOH greens with the treads and floorboards upstairs all painted a soft, Scandinavian white. There are three bedrooms, two doubles and a single which is currently used as a home office. There is also a bathroom with a shower in the bath.