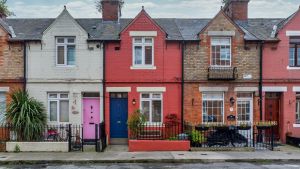 Ringsend may boast water on two sides, but Ringsend Park is the jewel in this corner of Dublin 4. It is a haven for dog walkers and gym bunnies and has proven itself over and over again as an ideal place for residents to escape to during the various levels of lockdown we’ve endured this year.

The street of the same name is probably the village’s premier address, but the side streets that run parallel to the other side of the green also warrant investigation. St Patrick’s Villas is one such road. It is lined with two terraces of pretty redbricks, many of which have been refurbished in the years since the area became a tech hub.

No 6 is on the side where gardens have a southerly aspect. When its owner bought the property in 2013, paying €347,000 for it, according to the property price register, all the heavy work had already been done by the previous owner.

She had opened up the ground-floor layout and straightened up the stairs leading to the bedrooms to reclaim valuable space on the first-floor landing. Light introduced through an overhead Velux in the internal bathroom, set between the two double bedrooms, makes this area feel airy and bright.

But it is at entrance level where the smart flow of the house is most apparent. The previous owner flipped the layout to bring the kitchen to the front, where it gets morning sun, and painted its below-counter units an eye-popping cyan blue. She then opened up the dividing wall and extended out to create a stepped-down living room, which opens out to the garden. The living room has a solid-fuel-burning stove and exposed brick surround with sliding glass doors, helping to knit the outdoors and indoors together.

While the current owners benefited from all these works, they further invested in the outdoor space, employing a landscaper for paving and planting ideas.

He came up with Liscannor slabs for underfoot and walls and fencing painted a dark grey, which make the tree ferns and grasses really pop. With floating benches made from durable iroko wood the space, which is almost 13sq m (139sq ft) in size, the garden is used constantly by its owners and on warm days acts like another room. “I wanted the garden to be green all year round,” she explains.

Christmas dinner: Tips and shortcuts from the experts
7

Lockdown was hard, but it kept us closer to each other than we’ve ever been
9

‘As we raised a toast, there was no talk of lockdowns or the distance that separated us - just the four of us ‘together’ again’
10