Builder's Take: Efficient heating – a dreary theme but will save you thousands

There are many renewable source options - wind, solar, geothermal, biomass - to consider for your home 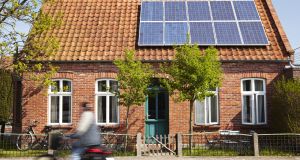 Solar panels: Once installed, for approximately €5,500, they have no running costs. Photograph: Istock

Energy awareness is front and centre these days.

We have movie stars driving around in hybrid motor cars just to be seen to care about the polar bears, and the US and China have said they’ll formally ratify the Paris climate change agreement.

So, what are we doing? Well, some are doing more than others, but one thing we can all do when building or renovating our home is to consider energy-efficient heat sources.

That’s quite a bit of hot water for an Irish family, and quite a lot of energy needed to heat it. Around 20,000kW in fact for an average Irish family. So, it stands to reason that to go for efficiency will lead to a good saving in the long run.

It may seem a dreary topic, but with new builds now required, by law, to have a certain amount of electrical energy supplied by renewable technologies, it is something more people need to consider.

So, the question is – can you get something that’s not going to blow your budget that will payback before too long?

There are many renewable source options (e.g. wind, solar, geothermal, biomass) but we will look at just one of the more viable ones for now, and compare it to the popular fossil fuel systems (gas and oil boilers) to see how they compare in cost and payback.

Around 700,000 homes in Ireland currently use oil-powered boilers. Oil is relatively expensive and is a carbon-intensive fossil fuel.  Gas boilers are also very popular. These have advanced over the years and, now, newer condensing boilers are up to 97 per cent efficient, but both are subject to carbon tax.

One of the more popular renewable sources, and one that is viable for every location – rural and urban – is the heat pump. These are electric-powered units that manage to get heat from either the air, ground (geothermal) or water.

An air source heat pump, which extracts warmth from the outside air, (even in sub-zero temperatures) is probably the more viable option for most. Still relatively new in Ireland, they have been used in Scandinavia for more than 40 years.

They satisfy the building regulations so they are now becoming more common.

Correctly installed air source heat pumps are emitting four times the power they need to run themselves (that’s 400 per cent efficient) when operating in the mean Irish temperature of 7 degrees.

So, that’s like a “buy 1kW get 3kW free” deal. To put it all in real terms, 1kW of power is about enough to power an electric shower for about 7-10 minutes. In addition, 1kW of power – according to the SEAI’S cost per kWh comparison – will cost you 7.91c with oil, 11.04c per kWh with LPG, 7.48c per kWh with natural gas, 10.69c per kWh with wood pellets, 14c per kWh on electricity (based on an average of night and daytime use, which a heat pump would). So, that’s nearly twice the price to operate the heat pump when compared to gas or oil – so that’s not looking good – but we must remember that for every shower we pay for, the heat pump is going to give us another three for free, so we could then say we are getting the kWh for 14 cent divided by four – 3.5cent. Now that’s looking like a saving. And with an average Irish family using 20,000kWh per year for water and home heating, that’s an €800 saving over natural gas/oil.

So, how much do these things cost? According to Green-house Renewable Energy Centre in Deansgrange, Dublin, an air source heat pump – with all its entourage, supplied, fitted and commissioned – will be in the region of €8,000. A high-efficiency condensor boiler, with its trimmings, will be in the region of €4,400, according to Barry Gilbourne Plumbing & Heating in Terenure, Dublin, for supply and installation.

That’s a payback in five years – hard to argue with. It’s also worth giving solar a mention. Once installed, for approximately €5,500, it has no running costs. However, it’s only drawback – and the reason I haven’t dwelled on it – is that it is not capable, by itself, to heat our homes as well as our water. But it is a great supplement to your heating system, and will save you money, with a quick payback. Once you have done your research, and chosen your renewable heat source, make sure you get your installer to show you how to control it, so you can fine tune the settings, over a year or two, to fully extract the bang for your buck.