Before and after: Dormer bungalow transformation 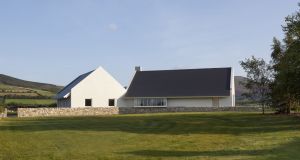 Two simple forms, side by side making one new singular home, bedded in the landscape

Dormer bungalows. This house type has been the scourge of many a pretty hilltop setting, from Donegal to Kerry, scattered aimlessly across the Irish landscape throughout the 1970s. This earned them a stigma that still survives. And as buildings are wont to do, they stay around for a while, so we are constantly reminded of our mistakes. Bungalows, for the most part, have always been seen as dark, depressing and uninspiring.

It started life as a fairly simple, unassuming house, set at the foot of surrounding mountains. The original house had a modest living space on the first floor, with small regular window openings, and the whole structure was oriented away from the dramatic views that lay beyond (problem No 1). The client was keen that architect Ryan W Kennihan (rwka.com) design a large living space where the entire extended family could gather, while simultaneously finding a way to connect the house to its beautiful surroundings (problem No 2).

Building in the countryside is always a bit tricky. What style should it be? What colour or materials to use? We don’t want to encourage pastiche design, but what does that look like? It has to blend in, but does that mean it should look like everything else around it? This house extension shows a careful and considered understanding of the vernacular, and it is this simplistic and sympathetic approach that has made this a bungalow like no other. Generally speaking, this means using simple building forms familiar to the rural setting, with pitched rooves and building proportions that are responsive to the landscape. It is lean and unfussy design, and it requires deft subtlety to get it right.

There was little appetite for the typical practice of adding a strikingly different extension on to the back of an existing house; instead they thought it might be possible to bring old and new together to make a beautiful new whole. The proposal was to strip back the existing cottage to its bare essentials making it more modern, but at the same time, close to its simple origins.

The idea was to extend the house by merging the old and the new into a single new collective. The extension took the scale, pitch and ridge height from the existing house, ensuring the two pieces worked together as one singular new home. Crucially, it oriented this new element informally at an angle, twisting its orientation to look towards phenomenal mountain views.

This, too, shows an understanding of how clusters of traditional farmstead buildings congregate close to one another. There is a loose order to this arrangement, almost informal, which works perfectly here.

Internally the extension creates a large dramatic hall for the entire family with different zones for viewing the mountains, eating dinner, watching TV or drinking wine.

The selection of materials is also pitch-perfect. Extensive use of timber, at different scales gives a balance between the strong muscular main structure, and the more delicate refinery of the ceiling joists, all forming one singular volume, under which many a family occasion can be housed with ease.

The new house is designed from the inside out. It has focused on the mountains, the grass, the views and the sky. It doesn’t try too hard to be different, and for that reason alone, it’s a standout performer.

This is a good example of what we often try to achieve when working with existing buildings – to create new architecture which is in close dialogue with the old; to create something modern but at the same time, borne out of its origins. Perhaps we could publish 100 variations of this house in a book to inform rural building for the next 30 years. Now that would be bliss.

Declan O'Donnell is an architect and founding partner of ODKM Architects, and occasional television presenter

Without visitors, my home became an empty doll’s house
6