€325K artisan revamp on a Dublin 7 street painted by Ballagh 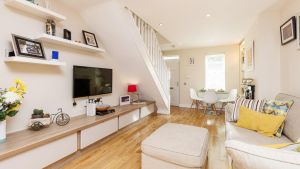 Temple Cottages is a familiar address in Irish art circles. The south-facing terrace of brick-fronted artisan houses is just beyond the boundary wall of Kings Inns on Constitution Hill, Dublin 7.

The quiet cul de sac was immortalised in 1977 by artist in residence Robert Ballagh when he painted his family outside their house.

Ballagh moved into Number 3 with his late wife Betty. She had lived in the property all her life. This was the late 1960s, and they paid £750 to the Dublin Artisan Dwelling Company for it. When the neighbour’s house came up for sale they bought it too, and converted the pair into a large, elegantly artistic space designed by Boyd Cody Architects.

It’s a pretty little spot not far from the Basin – a charming warren of streets that runs down to Blessington Street – that househunters in the Dublin 7 area will know. It’s a five-minute walk to Phibsborough village, while O’Connell Street and hip Stoneybatter are a 15-minute stroll.

The owners of Number 9 bought their home in August 2014, paying €235,000 for it, according to the property price register. While the ground floor was already open plan they upgraded it, installing a new gloss kitchen, customising the units to fit into the space, and fitting a long low-set bench above which to position the TV. Deep drawers underneath keep clutter from view.

A small dining area to the front features a cast-iron surround fireplace with gas insert and a round table that can accommodate four.

Upstairs the larger of the two bedrooms is set to the front, and from it you can see across to Constitution Hill. The second bedroom is a nursery for the owners’ small child.

Parking is on street. There is pedestrian access onto Dominick Street from the back of the house, which is north-facing.