Landmark home of Galway doctor to auction for €1.35m 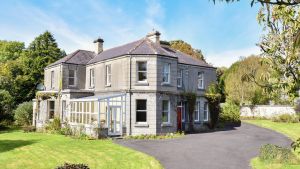 Some of the loveliest homes in Galway city are on Taylor’s Hill where residences of restrained splendour are hidden away among a proliferation of sheltering trees. Some of the trees have been there since before a mayor of the city named Taylor built one of the first houses along the steep incline bordering what was once the main road to Connemara.

Over the centuries, landed estates burgeoned around the Hill as Galway evolved into the prosperous capital of western Ireland. To this day Taylor’s Hill is lined with fine homes of distinction comfortably settled among the trees and guarded by sturdy walls.

One of those homes is Cluain Mhuire at the lower end of the Hill, a strikingly handsome period house approached by a long tree-lined avenue. The house, which is soon to be auctioned, was built in 1913 as a rectory for the Church of Ireland. The eminent gynaecologist Dr Eamon O’ Dwyer and his wife, Joy, moved into the house in 1961 shortly after he had been appointed Professor of Obstetrics and Gynaecology at University College Galway. They’ve lived there ever since, finding it a place of happiness and contentment and perfect for raising their children.

They’re sad at leaving Cluain Mhuire and would like nothing better than to see some other couple take their place and maybe bring up children there too. Before retiring from UCG Hospital in 1994, Professor O’Dwyer had a career of 36 years during which he delivered many children who are now part of Galway’s population. He undertook law studies after retiring from medicine and is now a qualified lawyer. He has also been prominent in the pro-life movement for decades.

Cluain Mhuire was originally designed to facilitate Church of Ireland pastoral activities and had two very large reception rooms on the ground floor to accommodate parish meetings and other functions. Later in 1961 when the house was considered too big for the needs of the Church, part of the extensive demesne, including the gardens, was sectioned off and a new smaller rectory was built with a private entrance.

The original old rectory was left on a separate expanse of land with flourishing gardens and its own private driveway winding through 0.8m of greenery to the front door. The old rectory was renamed Cluain Mhuire when Professor O’Dwyer and his wife moved in in 1961. They have spent happy days there since. Both are avid gardeners and have lovingly tended to everything growing in the extensive gardens, planting trees and shrubs to further enhance the surrounding beauty. Much of their gardening work has now reached maturity producing a relaxing country-like ambience in the heart of the bustling city.

Well known in Galway, particularly in medical circles, the O’Dwyers have been actively involved in community and charitable activities and their home was often the scene for parties, family gatherings and other social happenings.

Cluain Mhuire covers an area of 348 sq m, has four reception rooms, six bedrooms and two bathrooms. Each of the rooms has a dual aspect that provides two views of the outside. Much of the character of the original building has been preserved contributing to a pleasing ambience of times past.

Throughout the house there are a lot of charming features including original fireplaces from Edwardian times, high ceilings and a beautiful hardwood stairway.

The auction, conducted by Tony Kavanagh of Sherry Fitzgerald, will be held in the Ardilaun Hotel, Taylor’s Hill, Galway at 3pm on November 9th. The advised market value of the property is €1.35 million.