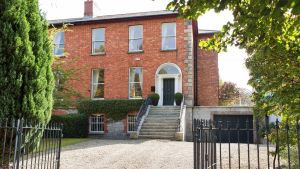 Potential buyers of period houses get nervous when they hear a property is a protected structure, fearing they won’t be able to change as much as a lightbulb without permission. Anyone viewing 2 Clyde Road in Ballsbridge can see – and hear over the screech of drills – that in reality that is not the case.

Its recently sold neighbour, at number 3, is getting quite the makeover. To the rear there’s a vast two-storey extension under construction, while a section of the back garden has been hived off for a contemporary mews.

The work is being done by number 3’s new owner Michael O’Leary, who bought the house two years ago for €2.85 million – the Ryanair boss paid €100,000 less than the asking price for the property that included the mews site, a rare and valuable find in this part of Ballsbridge.

The house now for sale – number 2, for €3 million through Sherry FitzGerald – has the embassy-belt credentials you’d expect in this part of Ballsbridge. It was rented for some years by the British Embassy, which explains why it has been staged for sale with swanky new furniture in the key rooms that show it off at its best: houses of this size, 376sq m (4,050sq ft) which have been rented, no matter who the tenant, tend to look a bit bleak if shown unfurnished.

It’s an ideal house for large-scale formal entertaining. The front door – up a tall flight of granite steps – opens into an outer reception hall, lit by a round-top sash window and with space for chairs and a console. Through another door is an inner hall and three reception rooms.

The very grand front reception has two tall windows and it opens into the back room, currently laid out as a diningroom. Together they make a very elegant L-shaped space with period features and the high ceilings and room volumes these houses are prized for.

There’s another, smaller reception room on the other side of the hall at the rear of the house – an ideal study – and also a guest toilet. Upstairs there are three bedrooms, two with ensuites, and a family bathroom. There’s a fourth ensuite bedroom down at garden level where the scale is more homely, with a family room to the front and an eat-in kitchen opening out to the garden at the back. Down here the decoration is all stripped pine and exposed brick. The kitchen units are also dated but the glossy black double Aga, a timeless addition to any kitchen, will likely stay.

There’s a garage to the side and the width of these houses mean a more generous garden than usually found in two-over-basement Victorians. While the mews site in this house was built on and sold off years ago, there is still a good-sized, wide rear garden and to the front there is a lawn as well as parking for several cars.

New owners might seek to go down the extension route, adding to the rear, but they could easily move in tomorrow and happily live in this fine period house – but they will most likely update the kitchen, bathroom and ensuites before they do much else.