Art of darkness in a Ranelagh home

Go dark inside: an artist and a landscape designers solution when their house had very little natural light 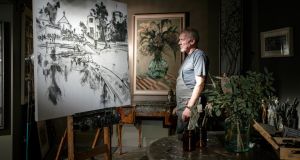 Painter Gerard Byrne and his landscaper wife Agata have converted a sliver of Ranelagh real estate into an expansive gallery-cum-home – one that has very little natural light.

Instead of trying to make it appear bright using dental white paint on walls, floors and ceilings – the guidance offered by most decorators, the artists in residence chose a counter-intuitive move, to go over to the dark side using deep restful green grey shades to create a really ambient home.

Self-taught Byrne – whose works adorn the walls of Irish embassies around the world and range in price from €2,000 to €15,000 – and his wife, a Polish landscape architect and horticultural designer, bought the property, number 15 Chelsford Road, sight unseen in an online auction.

The couple first met in Dalkey, where Byrne was living in a villa style house opposite Finnegan’s pub, on Sorrento Road and Agata Mocior was working in a cafe on nearby Vico Road. He sold the four-bed Victorian house for €1.6million in 2015.

The couple relocated to London and spotted number 15 in an Allsop auction listing in 2016. Guiding €340,000 to €355,000 it was touted as an office property on busy Chelmsford Road, a thoroughfare connecting Appian Way to Ranelagh in Dublin 6, and was considered to have residential development potential.

The idea was to buy it as a rental, Byrne explains. He already had a lovely studio in London and the couple had no intention of moving back but changed their minds deciding instead to open it as a gallery.

The building, just a glass sliver to the front, belies its actual size, which extends to 171sq m (1,840 sq ft) set over several levels. Dimly lit, its walls and ceilings are all painted in Little Greene’s Grey Moss, a deep sage green shade that feels like you’ve been swaddled in soft cashmere. It tricks you into thinking that some of the lower ceilinged spaces are cosy rather than claustrophobic. The lighting throughout works to enhance a sense of a very restful ambiance. Byrne is a master of the art form for before he became a painter he was an electrician and worked for the lighthouse service, servicing such landmarks as Loop Head and also worked in Australia, flying to outback towns and farms to repair generators. He installed the track lighting throughout with the nuanced eye of a professional. The trick is in the type of bulbs you use, he says, but even with his expertise it has been a case of trial and error. He uses LED bulbs in the pendant lights in the living space upstairs but in the gallery it is filament bulbs that shine on the works. He plans to eventually change these when he finds the right LED bulbs, but for now this is an ongoing quest.

Underfoot is a laminate found on eBay that feels very solid and there are plants everywhere. A tiny slice of outdoor space, sandwiched between the small kitchen and smart bathroom area to the front, has been planted with shade-loving greenery with the outside walls here painted a dark anthracite grey that makes the foliage stand out.

From gallery to home

At the end of the day the couple shut out the gallery area by simply dropping a fabric roller blind, closing off the front space from the back gallery, where there are some lovely mid-century modern pieces, most notably a rosewood desk and a pair of Eames chairs. Agata, a fan of the Scandinavian aesthetic says she likes the fact that vintage pieces seem to exude an energy from the lives they have already lived. These rooms are heated by limestone radiators that Byrne found in Mac’s Salvage in Dublin.

A single step leads up to Byrne’s studio, a divinely dark space that runs the depth of the building. A paint spattered easel stands in one corner, the unmistakable smell of linseed oil permeating the room. Oil paint splatters cover the brown furniture, a round pedestal table, for example, is almost like a work of art itself for it is lit from above, light pooling around its circumference to create interesting shadowplay.

The walls are adorned with Byrne’s works, large format florals, local streetscapes such as Mount Pleasant Square and Bessborough Parade, as well as other well-known parts of city such as Wellington Road and landmark buildings like the Shelbourne Hotel. He paints these en plein air, as the Impressionists did. All are daubed in thick applications of oil, layered using brushes and palette knives. Joining these are his newer streetscapes, these skeletal forms, the groundwork that he would do before laying the first layer of oils, rendered in charcoal. Which of his works is his favourite? Like a loving father he is reluctant to single one child over another but says that most of the time the latest picture holds the most power.

A secret door hides a storage room and a timber staircase siren calls you upstairs to a private space, in what was once a coach-house. Books fill the shelf space to the left as you climb the stairs. These share the surface with a knitted crib, for this visit was pre-Christmas. The scene, rendered in plain and purl, includes shepherds with sheep and wise men with complex headscarves, that Byrne’s octangenarian mother hand-stitched for the couple. She used to knit Aran jumpers for American tourists and also made them a figure of St Patrick that gets put on display on March 17th.

The lofty room is divided into three zones with a dining area situated at the top of the glass balustrades. Soft lighting set on overhead tracks highlight the art on the walls. The living area is dominated by a large piece by Byrne, painted while the couple lived in Brighton when Agata was working for renowned landscape designer Andy Sturgeon. It is housed in a frame they found while on honeymoon in Arles, following in the footsteps of Van Gogh, one of the painter’s favourites. It was found in a framing shop literally around the corner from the place where the Dutch post-Impressionist painted Café Terrace at Night, on the Place du Forum, in the southeastern French city.

There are steampunk style floor lights, items Gerard picked up for a pittance in London. He tinkered with them adding additional elements to create illumination that feels almost sculptural. Underfoot is a rug that Agata designed while studying garden design at London’s prestigious Inchbald School of Design. In 2015 she entered a competition run by carpet and rug company Veedon Fleece targeting mainly the college’s interior design students and won first place. Her prize was to have her design woven into a rug and it now has pride of place in their home.

Their bed is positioned closest to the room’s single window, casement in style and set low to the floor. For now their working wardrobes hang from a rail.

The property has vehicular rear access with a small outside space that the couple plan to landscape, part of long-term plans that include building another floor and, subject to planning, constructing a roof terrace that would take advantage of the property’s south-westerly aspect to the rear. Given the vista that the Press Up Group’s terrace delivers at the nearby Devlin Hotel on Ranelagh’s main drag, this could give them a whole other vista.

The Gerard Byrne Studio, fine art gallery is open Wednesday and Thursday 10am to 6pm and on weekends, Friday to Sunday from 12 midday to 7pm.