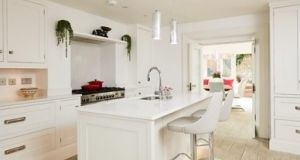 The kitchen, between the extension and music room, is by O’Connors of Drumleck. Photograph: Philip Lauterbach

“It is for practical reasons,” says singing teacher Maire Ledwith standing before a massive mirror in the basement of her Dublin home, showing how posture matters to the voice. She demonstrates opening her throat and dropping her jaw. “If you get it wrong, you quickly see in the mirror.”

Despite being functional, this looking glass also works perfectly with the refurbished room’s aesthetic, including white and pale grey walls. It also reflects William Morris’s rule about everything in your home being BOTH useful AND beautiful.

The basement comprised two separate rooms and a small extension when Ledwith bought the house on the city-centre side of Dublin 4, moving from a home nearby. Despite it seeming largely a business district, Ledwith says, “There is a very strong community here, even though we are in town. We all know each other. Also, I can walk everywhere from here.” This, along with the fact that the house has great proportions and that church bells rang when she stepped into the south-facing garden on her first visit, meant that Ledwith saw straight past the house’s damp and dimness and the textured wallpaper and heavily patterned carpets, in brown, yellow and claret.

“It needed total refurbishment but I knew it was for me,” says Ledwith who had revamped her previous home and added two extensions.

“This was very dark and brown, brown, brown,” says Ledwith, sweeping her arm around the now bright kitchen which was opened up to the piano room – previously reached via a standard door, albeit just 1.68m (5ft 6ins) high (“it shows how they were shorter in those days”) – and to an extension with windows and a glazed door to the garden. There is an oblong rooflight where the new room meets the kitchen. This was added by conservation architect Maol Íosa Molloy.

Ledwith asked for recesses in the wall here. She had seen such insets in a magazine – and indeed is an avid reader of architecture and interiors features in order to get ideas, hence the grey and white walls. In one nook is a white vessel made from overlapping porcelain leaves by Elizabeth Petcu, who used to play the flute in the RTÉ concert orchestra.

Ledwith had considered keeping a potential sculpture – a granite block that sat in this room – but eventually hired a small digger to remove it.

The original house revealed more of its own nooks in its deep walls. When the old kitchen units were taken off a wall, an inset was revealed that now accommodates cookbooks. In the study/bedroom on the return, there is a porthole in the thick outer wall. Ledwith’s brother sleeps in here when he stays, referring to it as the White Star Line room. This has a very clever desk in it that folds down into a double bed leaving all the paperwork, lights and other office paraphernalia intact, as it descends upright and tucks in beneath the bed. It fits the room exactly and comes from Irish company Lynmore Furniture (on hiddenbed.ie). Other storage includes box-benches in the extension and basement lobby and book shelves in the through living room – “I love my books” – and a walk-in wardrobe beside the main bedroom, built by Emmet Bannon (of EB Joinery). This leads through to a bathroom with a door on the far side into the second bedroom. There were three bedrooms on the top floor but Ledwith took out a corridor and added the bathroom and dressing room. “There were horrid wardrobes when I first came here and I said out loud: ‘No wardrobes’.” As a result both bedrooms are clear, calm spaces that support furniture from her parents and grandparents which she is still making decisions about, and a painting in the main bedroom by Stephen Cullen. “Any artwork I have, I know the artists,” says Ledwith who has a deep, witty piece in the living room by Vincent Sheridan, who she coached through a German lieder and was paid in this picture. “It’s fabulous,” she says.

She tried to keep the original steel bath in the main bathroom but once the shower and toilet were replaced the bath “looked dire.” The walls are in shiny white metro tiles and classic blue-and-grey tiles are on the floor (from City Tiles and Bathrooms), carrying through the theme of white and grey, and chrome. A modern touch is chrome everywhere you might expect brass to be, including stair rods and door handles.

Core building work such as rewiring and plumbing also included insulating the music room to stop noise travelling and annoying the neighbours. She did get one objection though; a neighbour complained that they could no longer hear the beautiful singing.