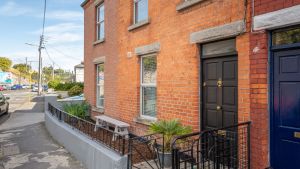 Anyone who has been house hunting in the North Strand and East Wall areas of Dublin will know that much of the housing stock there is small with few homes extending beyond about 100sq m. So at 127sq m /1,367sq ft number 27 West Road, an end-of-terrace red brick on the road along the embankment of the commuter train line to Connolly, offers a lot of living space.

The property was extended out to the side and back in the 1990s and now has three double bedrooms upstairs with another downstairs, off the living room. Currently there is just one bathroom, situated upstairs and featuring an ice blue bathroom suite salvaged from Mac’s on Islandbridge – coloured bathroom furniture is back in vogue. It can add much needed colour to what is often in many homes, an all-white stark space.

The first floor is accessed via a narrow set of stairs and this ground floor layout might be what the next owner looks at tweaking.

Currently the house opens into its original and modest hall and has a study that could potentially become a downstairs bathroom to the left. The living room, an internal space of almost 25sq m, is open to the stairs and is connected to the kitchen where there is another 31sq m, divided by a half wall of glass blocks that effectively brings light into the internal space.

The kitchen is sizeable and has an old roof light positioned over the worktops to bring natural light in while more glass blocks have been used in the utility area to the same effect. The kitchen has an island and plenty of room for a big dining table. French doors open out to a small terraced space, that while private and surrounded by high walls is small when you compare it to the internal footprint.

The property’s fourth bedroom is accessed via the living room. Most families looking at this property will see the benefits in having a bathroom downstairs and could turn the study into a washroom and the downstairs bedroom into a playroom for small kids or a den for older children.

The D1 Ber-rated property, which the current owner purchased in 2014 for €185,000, according to the property price register, is seeking €475,000 through agent Moovingo.