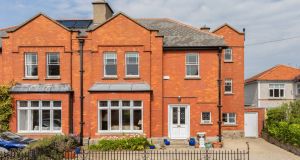 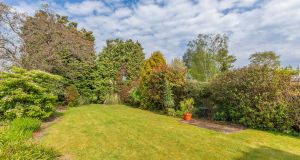 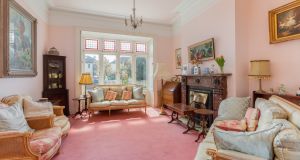 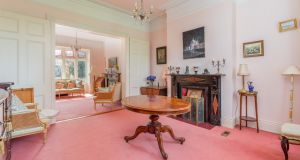 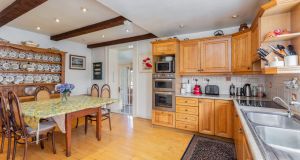 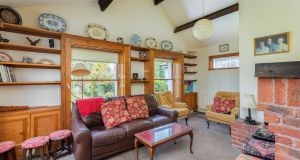 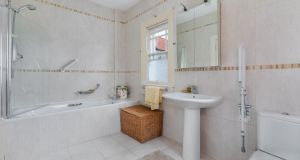 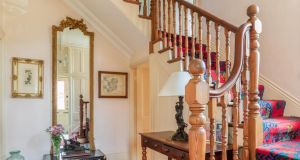 A carved timber staircase rises up three storeys to the top of the house.

A 240ft rear garden is one of the best features of an Edwardian property in a Blackrock cul-de-sac. On a sunny April afternoon, there’s a glimpse of a fox strolling down near its end, beyond the arch formed by two tall trees halfway along its length. The house, built in 1901, has been owned by one family for many years: it seems in good condition but new owners will likely want to renovate and modernise it. The 223sq m (2,400sq ft) semi-detached five-bed is for sale through Sherry FitzGerald for €1.45 million.

The house – originally called Drummany – is one of four built in Stillorgan Park by builder James Lawlor, apparently for his children, according to agent Ronan O’Hara. Original features include the front door with stained glass panels which opens into a tiled front porch and a carved timber staircase that rises up three storeys to the top of the house from the panelled front hall.

There are two large interconnecting reception rooms off the left of the hall with double doors in a wide arch. Both rooms have large marble fireplaces, ceiling coving and centre roses. The drawingroom at the front of the house has a tall box bay window, with stained glass panels. The diningroom at the rear has a window and a door opening onto the back garden.

A few steps at the end of the hall lead into the kitchen/breakfastroom: by modern standards, it’s dated although well maintained. It has oak units and a beamed ceiling over a large table that stands next to an imposing dresser filled with china.

A few steps from here lead into a cosy family room, an extension added by the owners: it has a beamed ceiling too and a raised brick fireplace. A door from here opens onto the back patio. It seems likely that new owners may reconfigure the space at the back of the house to create a modern open-plan kitchen/sittingroom looking onto the garden.

Upstairs, on the first return, there’s a double bedroom and a recently updated family bathroom beside it. There are three more bedrooms – two doubles and a box room that may once have been a nursery – on the first floor and a fifth double bedroom at the top of the house next to a dated shower room. These rooms are good-sized, with potential for en suites to be added.

The back garden, sheltered by high walls, has been well cared for: flowerbeds on either side of the long lawn are filled with mature bushes. Halfway down, at what seems to be the end of the garden, tall trees form a tunnel that opens into a secret garden with another long lawn where there are fruit trees and a copper beech.

There’s room to park three cars in the gravelled front garden, and a side entrance to the back.

Stillorgan Park is a quiet road, confusingly located off busy Stillorgan Park Road: it was turned into a cul-de-sac more than 20 years ago when its junction next to Carysfort Avenue was closed off.

I’ve always told my firefighter Dad 'I love you' as he leaves for work, just in case
Real news has value SUBSCRIBE