Housing crisis: ‘We must avoid any kind of knee-jerk reaction’ 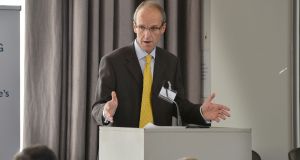 Planning regulator Niall Cussen: ‘It is not only appropriate, but incumbent on us to think long and hard about what is the best way to use a particular site.’ Photograph: Alan Betson

The Housing Fix is an Irish Times series exploring solutions to Ireland’s housing crisis – arguably the biggest social and economic issue facing the country and its next government – in the run-up to the general election.

As the State’s first planning regulator, Niall Cussen has a mandate to ensure local authorities abide by national policies on density and sustainable development – easier said than done when the pressure is on to facilitate homes.

However, he points out the cost of getting development wrong is not nominal, and bad planning leaves a legacy that lasts for decades.

“We must address the housing crisis, absolutely. That is the number one priority for Government and it will be huge a priority for the OPR [Office of the Planning Regulator] to assist in any way we can. But it’s very important that we achieve parallel objectives and obligations around the environment and around sustainable communities as well.”

The OPR is the process of evaluating the statutory plans of local authorities around the State, and will be scrutinising their county and city development plans as they come up for renewal. Many will require change if they are to become sustainable, Cussen says.

“There are a lot of development plans and local area plans out there where, not to put too fine a point on it, if all of those lands were activated it would be overwhelmingly car-based. It would have a very, very significant effect on congestion.”

It’s one thing to include climate, sustainability and density objectives in development plans, but local authorities have to follow through on those principles, “not just by putting an objective saying ‘we’re going to address that’,” he says, but by scrutinising “the shape and form of the development envisaged”.

“How accessible is public transport? Are we really promoting cycling? How can we be sure, that the forms of development that we’re promoting in the particular development plan are more climate friendly than other forms?”

Local authorities need to consider that in addition to a housing emergency, the country is facing a climate emergency, he says.

Dublin City Council has “already nailed its colours to the mast in terms of looking at the key opportunity in infill sites around the city” through their plans to reuse underperforming industrial or “brownfield” sites for housing, he says.

However, such initiatives need to be replicated in all urban centres if sustainable communities are to be achieved, Cussen says.

“We are a low rise, sprawling type of country in the way we develop a lot of our urban areas,” he says. “Greenfield is activated a lot, brownfield is stagnating somewhat in relation to housing delivery,” he says.

“It is not only appropriate, but incumbent on us to think long and hard about what is the best way to use a particular site, because once we’ve used it, it’s gone.”

Crispr gene-editing technology: what is it and why you need to know about it
3