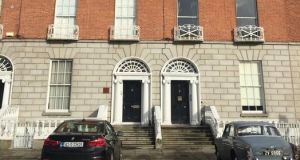 With so much of the hoo-ha in relation to Irish property company Iput’s redevelopment of Wilton Place in Dublin 2 focused on its construction of a new European HQ for Linkedin, its plan to deliver bespoke apartments immediately next to the massive campus have very nearly gone unnoticed.

According to the planning application it submitted to Dublin City Council on December 20th last, Iput is seeking permission to replace 20 apartments it owns in two adjoining Georgian buildings at Wilton Place with 18 larger units. Should the plan for numbers 2 and 4 Wilton Place be approved, the scheme will comprise 11 one-bed units, six two-bed units and one three-bed unit.

While Iput declined to comment, a source insisted the units would be let on the open market as opposed to being reserved for Linkedin employees.

The same source was adamant that Iput had been engaging with the remaining tenants at numbers 2 to 4 and would give them adequate notice to quit their homes ahead of the proposed renovations.

Iput would certainly seem to be moving fast. It only bought the building in Ausust 2019, according to the property price register. However, it’s likely that the notice period for tenants will run into next year. Watch this space.