Off Pearse Street, Victorian square is an oasis of green on fringes of Googletown 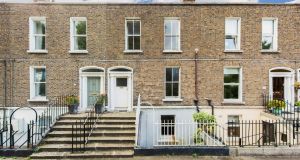 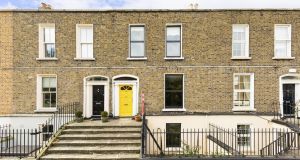 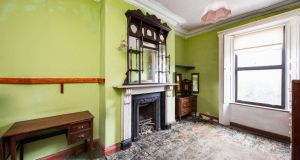 The 57 houses that line Pearse Square, just off Pearse Street in Dublin 2 and one of Dublin’s early Victorian squares, are surrounded on almost all sides by sleek tech offices.

It’s a price that may look like good value when you start doing the sums required to return two grand dames that have just come to market to their former glory.

Both houses are on the west side of the square. Lisney is set to auction number 11 with an attention-grabbing AMV of €600,000 – the price of a decent two-bedroom apartment in the area.

Set in the middle of the terrace, number 11 is the larger of the two now for sale. It measures 205sq m/2,201sq ft and has ceiling heights of over 2.7m at hall level, and about 2.4m at garden level. Theback garden is about 20m long, with vehicular access on to Byrne’s Lane where a buyer could, subject to planning permission, build a mews.

Number 17 is a slightly smaller house with 195sq m/2,105sq ft. Its front room has been subdivided so it feels a little less bright than number 11 – although that may just be an optical illusion as the day was not so sunny.

It has the same sort of ceiling heights as its neighbour, a garden shed and a garage to the rear so the back garden feels a little more confined. It is a private treaty sale asking €750,000 through agents Knight Frank.

Both houses are accessed via steep granite steps to the front and have three-storey returns to the rear. Both are overlooked to their west-facing rears by recent development. Each is listed as a protected structure and both need complete renovation.

Back when construction on the square started in 1838 it was named Queen’s Square and the then new homes boasted the mod cons of the day including piped water and sewerage.

When The Irish Times was viewing it, a potential buyer arrived with a builder in tow. He felt number 17 was a slightly better buy but it really is much of a muchness. Whatever value you may feel you get in the purchase of either will end up being cancelled out in building costs and heritage architect fees. Guy Craigie from Knight Frank estimates you could spend a (rather modest) minimum of €250,000 renovating number 17 and another €350,000 developing the mews behind it.

In 1838 this was a newly-gentrified area, built on reclaimed land that had once been a tidal swamp that was flooded regularly by the Liffey. The green space to the centre was for the private use of residents. Today it is a public park, open to all.

A decade after the Easter Rising the locale was renamed Pearse Square in honour of the Pearse family, who lived and had its ecclesiastical and architectural stone sculpting business at 27 Pearse Street, now Ionad an Phiarsaigh, The Pearse Centre, birthplace of Patrick Pearse.

By then the gentry had moved out with dockers moving into the houses and the area became run down. Tarmac replaced the grass in the square in the mid-20th century and it wasn’t until the 1990s that Dublin Corporation began to look at reinstating the original railinged park, with plants, paths and lawn, commissioning sculptor Sandra Bell’s Harmony, a figure playing a coronet, as a centrepiece, and located where a bandstand had once been.

The auction for number 11 takes place on Thursday, February 13th at 2.30pm.

When it comes to carrot cake, there are two types of people
10