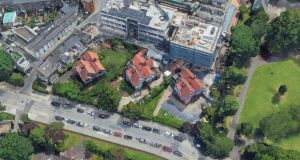 The McSharry and Kennedy building families, who own the Herbert Park Hotel, have ambitions to build 105 new apartments fronting on to Herbert Park.

In 2016, the families’ investment vehicle, Lordglen, bought up two adjoining period houses at 36 and 38 Herbert Park for a combined €6.2 million with hopes of replacing them with a boutique development comprising 18 apartments.

It appears Lordglen was also the mystery purchaser of the neighbouring house at 40 Herbert Park in 2018 when it traded hands for €2.725 million.

The company has now begun a consultation with An Bord Pleanála under the fast-track planning process in hopes of demolishing all three houses and replacing them with a major new 105-unit apartment scheme.

If the planning board rule that the proposed development is reasonable, Lordglen will be permitted to move forward to a full planning application.

Planners will need to look no further than nearby developments fronting on to the park, including landmark Ardoyne House at 11 storeys tall and the ever-popular Herbert Park Lane apartments at seven storeys high, to find precedent for higher development on the site.

In all, Lordglen has spent about €9 million acquiring the three Herbert Park houses, assembling a prime site that extends to about 0.34 hectares (0.84 acres) in size.

By those measures the site with planning could be worth upwards of €30 million, especially as Herbert Park is one of Dublin’s prized residential addresses thanks to its verdant setting and proximity to both Donnybrook and Ballsbridge villages.