My rear wall needs mending because of my neighbour’s tree

He wants us to pay half the cost of repair, are we liable? 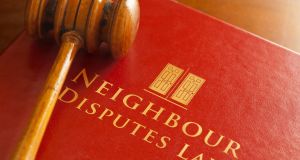 The cost of going to court could outweigh the cost of remedial works however if the neighbour refuses to engage to resolve the issue you will have no alternative. Photograph: iStock

My query concerns a rear party wall that is cracked and crumbling due to the neighbour’s tree which abuts the wall. The tree has never been maintained despite several requests on our part to discuss the matter. The neighbour wants us to pay half of the cost to rebuild the wall and we would like to know if we are liable, as it is his tree that has caused the wall to buckle and crack.

The neighbour has been put on notice verbally of the issue of his tree causing damage to the party wall but until now has ignored your concerns. All proper precautions ought to have been taken by him to maintain the tree to such a degree that it would not damage the wall. The failure to take such measures is now interfering with your proper use and enjoyment of your private property.

It is advisable to engage an engineer to inspect the wall from your side in order to confirm that the cause of the damage emanates from the tree in your neighbour’s property. While this might incur some expense it could be crucial at this point in convincing the neighbour that the wrongdoing rests with him and thus the cost of remedial work should be borne by him alone.

If attempts to resolve the matter amicably are unsuccessful, then you should send a written complaint enclosing the evidence you have gathered to include photographs and engineer’s report. This will ensure your neighbour is aware of the issues and the damage caused. It should further put your neighbour on notice that you are prepared to take the appropriate legal proceedings if you do not receive an appropriate response within seven days.

If the neighbour agrees to carry out the works at his own expense you should ask for a copy of his insurance details before they enter your property (if entry is required).

If your letter does not have the desired response, you may have to consider legal action. It is of course preferable that an agreement be reached without recourse to the courts and perhaps alternative dispute resolution methods could be explored to include mediation which might limit the costs involved.

The cost of going to court could outweigh the cost of remedial works however if the neighbour refuses to engage to resolve the issue you will have no alternative. In addition to the remedial works you will be seeking your costs to include the costs of legal representation and any expert witnesses engaged. – Paul Cunney