A renovated garage, a model of micro living

This tiny rented home in Blackrock, Dublin ticks all the boxes for vet Rodney Gale 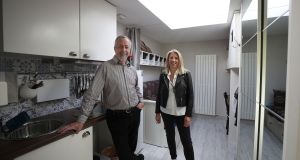 Interior designer Esther Waters in her renovated garage with Rodney Gale, who rents out the micro home in Blackrock. Photograph: Nick Bradshaw

For over a year now, Rodney Gale has lived in a space measuring 6ft by 13ft. His Dublin rental is a former garage that was converted into a dwelling by his landlady, Esther Waters, an interior designer who specialises in small spaces. The garage adjoins Waters’s own home, a three-bedroom semi detached house in a quiet road in Blackrock.

Waters, who works with colleagues Caitriona O’Brien and Lorraine Able on a variety of private and commercial projects in their interiors business, The Design Team, decided to tackle the conversion on her own doorstep after becoming interested in the “Tiny House Movement”. Her tenant, Gale’s own journey to small space living started out of necessity.

After moving to Ireland seven years ago from his native Canada, the equine vet and his wife Heather Ross-Gale settled well into their new home near Castlerea, Roscommon. It was all going well and they were pleased as punch with the impressive old Franciscan monastery that gave them 557sq m (6,000sq ft) of living space.

Their only problem was employment. There wasn’t enough work, locally, in Rodney’s line of business, so he took up a position as a lecturer in UCD. With a sprawling pile to maintain in Roscommon, and few needs in terms of space, Waters’s garage-conversion ticked all of Gale’s boxes.

Gale’s position at UCD also involves being on call for a 24-hour emergency care service. He’s on duty every second night and every other weekend. So for the past year, aside from the occasional trip back to Roscommon, home has been what’s known in the Tiny House Movement as “a micro dwelling”.

Does it get claustrophobic?

“No, not at all. Maybe it’s partly my gender, but it’s so small and easy to keep clean that I like it very much. There’s maybe this idea that vets go around covered in mud. Equine medicine is a bit different to, say, a rural veterinary practice. I don’t wear my wellies when I’m working in Dublin. I walk through the door, kick off my shoes and I’m home.”

The space contains, incredibly, a sofa bed, a loft bed, a showerroom and a functioning kitchen. There is ample storage and a compact outdoor area which includes a discreet lean-to where a washer-dryer and freezer are housed.

Design ideas, says Waters, stemmed from holidays spent in a VW campervan. Ever the observer, she says, she was always noticing how to maximise storage in small spaces. After keeping students in her home under the rent-a-room scheme, Waters decided there would be more comfort all round if she put her under-utilised garage to better use. She commissioned a builder and carpenter to work from her drawings. Aside from a sofabed with drawers for storage, everything else was bespoke/ built-in from Waters’s designs.

With space at a premium, Waters had to be clever. She raised the floor of the bathroom to conceal all the utility piping. Then fitted a shower tray which doubles up as the bathroom floor and is large enough to also carry a toilet. The shower head is mounted on the wall over the toilet, in a similar fashion to many caravan-bathroom designs. The build and fit-out costs came in at close to €22,000, with over €4,000 going on a new roof, fitted with a skylight, for the garage.

The conversion has been a success and has been put to the test by a number of visitors and tenants. Waters’s sister came to stay shortly after completion, along with her husband and two children. She found it very comfortable but, says Waters, she and her family do like caravan holidays.

It’s particularly suited to people who understand the benefits and limitations of a confined space, but with a list of previous tenants including two German master’s students from the Smurfit Business School, a Montessori teacher and a college professor all staying for at least two terms, the former-garage has proved a popular rental. Friends and neighbours have been impressed by what Waters has achieved in the space and she has been asked to advise on a number of similar projects.

“The living space here has worked out wonderfully,” says Gale. “I laugh, because it’s so dramatically different to the place in Roscommon, but it suits my purposes in Dublin. I tell people it’s my little refuge from the working day and all the activity of UCD.”

Gale is enthusiastic about his mini homestead which also, he says, suits his other interest in life. As a hobby-musician and songwriter, he loves having a cosy quiet place to sit with his guitar.

“I can spend a lot of uninterrupted hours here. It works for me. It wouldn’t work for everybody.”

His wife lives in Roscommon most of the time, but does visit every second weekend or so. She brings a number of meals when she comes, which they freeze; though Rodney also regularly cooks his own meals in the pocket-sized cooking area. He finds the simple functionality of the kitchen more than adequate.

When Heather is staying, they find they can negotiate the tight quarters comfortably; it’s a negotiation that’s helped, says Rodney, by their earlier experience of spending time living in a confined space. Earlier in their marriage, before his Dublin foray, the pair spent quite a bit of time travelling around Canada in a small mobile-converted van.

While inhabiting a confined space has its challenges, with the right approach it can, says Gale, be a very comfortable and satisfying way to live.

He says he and his wife’s life have been enhanced by being able to spend time together in Dublin. At their little home they do what they might normally do – cook and eat together, sit outside with a glass of wine or a beer on a nice day. They enjoy being there and love the easy access to nice restaurants and beaches. In Roscommon there are always lots of chores in such a big house, with a large garden and a few acres of land. In Dublin they can spend hours just relaxing.

“Even when the two of us are there I don’t think it’s ever felt claustrophobic. With the little sitting area just outside the door, it’s great to sit out. If I need to get away I walk the neighbourhood, stretch my legs.”

Of course there are practical considerations too. Budget-wise it makes a lot of sense, particularly in urban areas where property is at a premium and high rents and availability put pressure on the system to meet the demands of both the rental and purchase markets. With rent-a-room-scheme earnings up to €14,000 per annum allowable tax-free, the model is one that can benefit both tenants and house-owners keen to bring in extra revenue from their own home.

It’s a model of efficient space-management, that designer Waters thinks could catch on and go some way towards addressing the increasing rental supply and other housing challenges that Dublin, in particular, is facing.

A recent report into affordable housing shortages in California suggested that garage conversions, granny flats, backyard cottages and the like could go a long way to tackling what one housing-charity executive described as the single biggest problem that California faces. Research there found that countless numbers of garages were lying empty.

Waters sees a lot of scope in the area of micro dwelling, and says she and her colleagues in The Design Team are getting inquiries.

“Since I did my garage, I’ve had lots of the neighbours coming by asking to see how it’s turned out. Everyone has reacted really positively, with some looking at following suit.”

Waters’s own enthusiasm stems from a few areas. It’s about transforming a space from something lacking in personality or perhaps in need of a makeover, into a space that people will live in and enjoy. It’s about clever design and efficiency. It’s about economics and affordability.

“The ‘Tiny House Movement’ fascinates me. My former garage is a very comfortable living space. It works for me and it works for Rodney.”

The Design Team, though a relatively new business, is thriving, with no space on the books for new clients until January 2020 at the earliest. With plans to keep developing skills and expanding the reach of what they can offer to clients, Waters predicts that design in the area of micro-dwelling will feature strongly in their business, going forward.

It’s about, Waters explains, being able to offer clients choice, while also working on projects that give the team and their clients a sense of personal satisfaction.

Paul Flynn: Three delicious dishes you can bank on this weekend
Real news has value SUBSCRIBE