Is this tiny Ranelagh apartment a bargain at €205k? 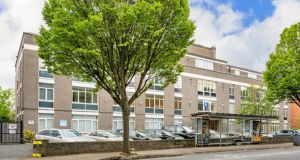 Property doesn’t come cheap in Ranelagh, one of the chicest neighbourhoods in Dublin, so it’s surprising to find an apartment in the area changing hands for just €205,000.

Number 27 Courtney House, a one-bed flat in a 1960s block that was one of the city’s first purpose-built apartment developments, has been sold for just shy of its €210,000 asking price. Although it may seem cheap for a self-contained home close to the city – and well below the average Dublin house price of €388,000 – the new owner isn’t getting a lot of space for their money: number 27 measures just 22sq m/237sq ft, well below the 45sq m/484sq ft most recently introduced by the Government as the minimum size for one-bed units.

Courtney House is set back from Appian Way, on a junction with Upper Leeson Street. It overlooks the grounds of Fitzwilliam Lawn Tennis Club and is within walking distance of the shops and restaurants of Donnybrook, Ranelagh and Leeson Street.

The apartment is “highly dated”, according to Michael McDonagh of Young’s estate agency, who sold the apartment. Home to an elderly woman for about 30 years, it went sale agreed after just three weeks, he said, having been viewed by about 30 home hunters and investors.

Potential owner-occupiers were, he added, eventually put off by the bijou nature of the first-floor flat: inside it is just 2.6m (8½ft) from front door to window – narrower than a standard train carriage – with a long, narrow living room leading to a galley kitchen and a combined pocket shower room and utility room. At the other end of the space is a separate bedroom with room for a single bed, bedside locker and not much else.

The living room has a wall of picture windows overlooking Appian Way, making it exceptionally bright, but the open-plan kitchen is extremely tight, with a fridge jammed in at knee level, and an undercounter microwave oven.

According to McDonagh, the flat has been bought by an investor who is renovating it as a studio. “In such a limited space it seems like the sensible thing to do. That wall between the living room and the bedroom is taking up valuable space, you could say.” He expects the studio to rent for up to €1,450 a month when complete.

The Courtney House apartment does has some extra features: central heating is included in the service charge of just over €1,550 a year – it runs from October to April – and the apartment also comes with parking in a communal parking area.