If you’re something of a serial killer when it comes to window box plants, then you’re probably not watering them enough 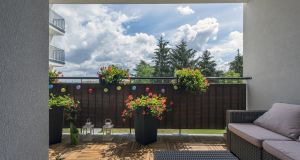 I recently made the mistake of smugly pointing out to an old, non-gardening friend of mine that her summer window box could, with just a little TLC, be a thing of beauty rather than an affront to the eyes. “Right. Thanks for that,” she replied tartly, fixing me with a steely glance. “So here’s an idea. How about clambering down off that horticultural high horse of yours and instead helpfully suggesting what I could plant in it that would be (a) easy to grow (b) easy on the eyes (c) nice to eat, and last but definitely not least, capable of putting up with a certain amount of wilful neglect?”

“Well that all depends on what exactly you mean by ‘wilful neglect’,” I replied loftily, realising that at this point I might as well be hung for a sheep as for a lamb. “If it means, for example, never, ever watering it and using your window box as a convenient ashtray or somewhere to tip the remains of your takeaway coffee, then no, I can’t really think of any plant that’s going to put up with that for very long . . .”

My non-gardening friend snorted loudly. “I mean,” she continued, rolling her eyes heavenwards, “the sort of plants that won’t collapse in a namby-pamby, limp heap of foliage just because they’ve been left without water for more than 24 hours. The kind that doesn’t demand to be deadheaded every other day, and that doesn’t succumb stickily to greenfly in the blink of an eye. In short, the kind that doesn’t have to minded like a small child.”

Together we eyed up the skeletal plant remains sadly occupying her window box. “Just as a matter of interest, what were they when they were alive?” I asked curiously. But she couldn’t (or wouldn’t) tell me.

In the end we struck a deal. For my part, I agreed to come up with a list of pretty and/or productive, resilient plants suited to a summer window box and capable of being intermittently ignored. She, in turn, promised not to abandon them to a slow and painful death. I’ll let you know how that goes. Meanwhile, this week’s column is dedicated to all the non-gardeners out there who, just like my friend, also quite like the idea of having a summer window box – just so long as they don’t have to mind it like a baby.

Let’s start with the nitty gritty. When you’re growing plants in such a very confined root-space, they need a great growing medium that doesn’t dry out too easily, so make sure to use a good-quality, soil-based one such as John Innes No 2. Then mix in a few handfuls of an organic, slow-release pelleted fertiliser to keep your plants well-fed.

For obvious safety reasons, also make absolutely sure your window box is made of a durable, frost-proof material and that it’s fixed securely onto the window sill using metal brackets. If you’re something of a serial killer when it comes to window box plants (you’re not alone), then you’re probably not watering them enough. In this case, a window box with a built-in water reservoir will really help to prolong their ability to withstand neglect. Examples include Artstone’s elegant ‘Claire’ window box, stocked by Howbert and Mays (howbertandmays.ie), which comes in a range of subtle colours (light grey, dark grey, terracotta and dusty green).

Howbert and Mays also stocks Artstone’s larger ‘Ella’ balcony planter, which also comes with its own in-built water reservoir. Budget permitting, it’s also possible to get window boxes custom-made to suit the exact dimensions of your windows. For example, Darach La Grue of the Decking Depot (near Kill, Co Kildare) will custom-make them in timber to your required design (087-276 2029). Just line the insides with plastic to help them to retain water, while making sure to poke a few holes in it to prevent waterlogging. You can even have your window-boxes custom-made from metal and then powder-coated to fit in with a particular colour scheme (see dundalkengineering.ie, galco.ie and dunboynepowdercoating.com).

As for the plants themselves, you’re looking for mainly tough, drought-tolerant, compact species. For a summer window box in a sunny south or west-facing position, I suggest any of the following: the more compact forms of Lavandua angustifolia, or English lavender, which has deeply scented, edible, purple or white flowers in summer (use them sparingly to flavour ice creams, cakes and sorbets) and aromatic evergreen silver-grey foliage; Mexican fleabane or Erigeron karvinskianus, which produces a mass of small, pretty, daisy-like flowers throughout the summer months; prostrate rosemary (Rosmarinus officinalis ‘Prostratus’), the culinary/medicinal evergreen shrubby herb with pretty, edible blue flowers in summer; any of the many different kinds of evergreen, hardy and highly decorative sempervivums; Artemisia ludoviciana and Cineraria ‘Dusty Miller’ for their handsome silver-white foliage: pelargoniums, which also thrive in these sorts of bright, dry growing conditions, throwing out dense clusters of flowers from early summer until the first frosts; argyranthemums for the same reason, although just like the pelargoniums, they do need to be deadheaded intermittently to prolong flowering; and nasturtiums, whose peppery leaves and jewel-coloured flowers are both edible and tasty.

For a window box in a cool, shady spot less likely to dry out, you could use any of the following: trailing ivies (hedera), trailing fuchsias, parsley, mint, various ferns including species of Polystichum and Dryopteris filix-mas , vinca, ajuga, certain ornamental grasses such as Carex comans, begonias, Liriope muscari, heucheras, and the tough-as-old-boots but very pretty Saxifraga stolonifera.

After planting, finish off by giving your window box a really good watering and then mulch the surface of the compost with a shallow layer of fine horticultural grit to preserve moisture. I’m very tempted to add that after all that, it’s just a simple matter of giving your window-box some occasional TLC. But then again, my non-gardening friend might be reading this . . .

Many summer climbers are now in vigorous growth, so it’s important that they have some sort of sturdy support to help them to clamber up walls, pergolas and arbours. Tempting as it is, don’t attempt to weave new growth through trellising as it can constrict and even damage the plant as the stems thicken, while there’s also a risk of the plant eventually pulling the trellis panels loose from the wall as it grows. Instead, use garden twine to gently tie any new growth against it, making sure to spread it out in a fans-shape so that all of the stems have adequate room to grow and spread. Another, less visible alternative to trellising is to use lengths of chicken wire, galvanized sheep wire or pea netting fixed discreetly to the structure.

The recent warm, dry weather has been wonderful for roses, encouraging them to bloom profusely over the last number of weeks. To prolong their flowering as well as to encourage a second later flush of blooms, it’s important to keep deadheading any faded flowers. Always wear garden gloves and long sleeves when deadheading roses to protect your hands and arms from their sharp thorns and use a sharp, clean secateurs to help prevent disease entering the plants through the pruning cut. For the same reason, it’s also best to carry out deadheading on a dry, sunny day.

In the allotment or kitchen garden, there’s still time to sow seed of carrots, peas, radish, spinach and turnips as well as Florence fennel, lettuce, kohlrabi and purple sprouting broccoli. If slugs and snails are a recurrent problem in terms of causing serious damage to young or emerging seedlings, then consider making sowings into modular trays filled with a good-quality seed compost and placed on an outdoor table. These can be transplanted into their final growing positions as young plants, at which point they’ll be much more capable of fighting off attack. Most kinds of vegetables are suited to this method, the exception being those with a long tap root – for example, carrots and parsnips – that need to be direct-sown.

How will the Covid-19 era affect our youngest citizens? Let us count the ways
Real news has value SUBSCRIBE