A house, seven friends and a baby: at home with Faye Dinsmore

The model and knitwear designer lives in a big rented house with her husband, Web Summit's Paddy Cosgrave, their baby Cloud and five friends 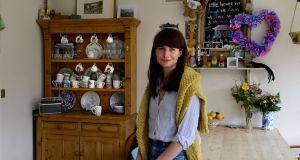 Faye Dinsmore wearing one of her sweaters. Photograph: Cyril Byrne

Faye Dinsmore, model, mother and founder of a knitwear label, is the second youngest of a family of 14 who grew up in a farm near the seaside village of Ballintra, Donegal. Having started her modelling career at 22 while a student of French and classics at Trinity College, she has worked in the fashion industry for more than 10 years, signed up to some of the world’s top international agencies. She is known for her outspoken views, and she flitted between New York, London and Paris furnishing bright, entertaining blogs about her adventures and opinions on the backstage life of a model.

She is married to WebSummit founder Paddy Cosgrave, with whom she has a 19-month-old son, Cloud Valentine. The couple have been living in a three-storey redbrick overbasement house in Ranelagh for the past four years, which they share with five other adults, including a primary teacher, a piano teacher and an art teacher from Donegal.

She and Cosgrave are used to communal living, having been boarders at school. Their kitchen table, where everyone gathers, was their first purchase “and is big enough for us all to sit around, talk and eat”, she says. “A home is nothing without joy and fun and I grew up in such a household. I have lived in so many different places, from one-room flats in London to townhouses in Manhattan and everything in between. I know it is a cliche but homes are made of love, not things. This is a busy house.”

She loves cooking. The household couldn’t survive, she says, without the help of Anne Delaney, who “sorts out the house” every weekend and who has become a friend.

The couple made a conscious decision to support local businesses when furnishing the house, so everything in the kitchen and the bookcases in the middle room came from Christy Bird in Portobello – “our go-to place for solid wood furniture. Almost everything else is upcycled, as we are pretty keen on recycling in this house”, she adds. Otherwise unacquisitive, she collects cow art from Irish artists, prints by Daniel Lipstein and Sinéad Wall of the Printmakers on Drury Street and pride of place goes to a frame she bought on Francis Street, into which she put a chalk board. “I have been told it is an old Stations of the Cross frame,” she says. Everything else on the walls comes from little galleries around the country, “because it is nice to remember somewhere you’ve been even if it is only a little trinket”. If money were no object, she would spend it on a garden with a big potting shed.

She escapes home to Donegal as often as she can, but when she needs to get out of the city otherwise with Cloud, she heads for the Devil’s Glen near Ashford, where she and Cosgrave, whose family home is nearby, used to walk when they first met. “Where we live now is based between Rathmines and Dartry and very central, and we have the really great Palmerstown Park just across the road and are in walking distance of Rathmines, Rathgar and Ranelagh, where we can get everything we need.”

Cloud, a sociable and energetic little boy, gets on well with the other housemates, she says – “some read to him, others play with him and he knows everybody’s name. We are all over 30 here and not students.”

She has lived in many cities – London, Paris, Barcelona and New York, but Paris would be her favourite, particularly since she speaks French. “I didn’t live in model houses, but with friends on Erasmus who were not in fashion, and it was my first time living away from home and I loved the city. There are so few supermarkets and you buy your bread from the boulangerie and I like the French way of taking time for everything – everyone sits down for lunch together. It is so different to Dublin. In Paris people live in the city centre, over the shops, and you don’t get that here. So the atmosphere is very different.”

When she travels on the bus into town with Cloud, she notices the derelict buildings on Camden Street and George’s Street, “and it is not a good look for a city centre”, she argues. “Dublin is a great place, a small and accessible city, but the city centre area has so many derelict buildings that you wonder what sort of impression that makes on a tourist. Paris has a vibrant culture, because people populate its centre – why are we building housing estates outside the city or creating office spaces in the city centre that are deserted at the weekend? We pay the highest rents, but this is not reflected in the standard of our housing.”

Though motherhood is all-consuming, Dinsmore is still finding time to complete a history of art degree in Trinity College Dublin and a gardening course in Trinity Botanical Gardens. In July she will be one of the 22 designers selected for this year’s Create in Brown Thomas. Her knitwear brand, a side project when she was at college, is now a serious business and her Repeal sweater, a traditional white Aran handknit with a specially commissioned embroidered red heart and slogan, gave a new political twist to an iconic Irish garment and generated many requests for copies, including from the Women’s Library in Glasgow and from Irish comedian Aisling Bea.

Cosgrave now operates his business from the Tramyard in Dartry, “just 400m from our house”, so although there are long-term plans to buy a house “we are okay where we are at the moment”, she says. As the founder of the WebSummit and MoneyConf hub, Cosgrave’s demanding schedule means he travels a lot – Hong Kong in a few weeks’ time, then on to New Orleans and Toronto, “ so although he could be gone for three weeks at a time, I am never at home alone”.