It's a long road to Kerry's Lost Cottage - but oh, when you get there, it's beautiful

It took 10 years to build this remote cottage above Carragh lake near Glenbeigh. It’s now a sought-after holiday rental – and its unique style is an inspiration to architects 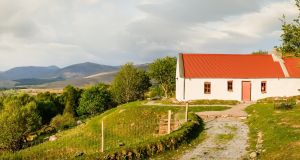 There’s a long wait if you want a weekend away staying at “Kerry’s Lost Cottage”. It’s not surprising given that this is no ordinary holiday rental. Having featured in this season’s Room to Improve, and widely in the international press, the property’s popularity has soared. If you want a summer break at this unique location, complete with stunning views over Carragh Lake, you will have to wait until 2019 – and pay around €1,500 for a three-night stay. But it’s not just the cottage and its location that are unique. The story behind its transformation by architectural firm Urban Agency is just as special.

For most architects, designing a house from inception to completion might typically take around 18 months. Urban Agency, which has offices in Dublin, Copenhagen, and Lyon, were appointed 10 years ago by businessman Brian Spain, who ran an Irish pub in Paris called The Coolin for many years. He who was interested in a building a home for his retirement on the remote Kerry site which was populated by goats. Inspiration for the building that finally emerged came from the bold abstract paintings of Brazilian artist José Bechara, the soft and gentle hues of Edward Louis Lawrenson’s paintings of the Irish landscape and, crucially, a bag of iron oxide soil fertiliser, the kind available in most garden centres.

A decade on, phase one of what is a two-phase project is complete. Phase two, a two-storey extension, will, hopes Urban Agency’s director Maxime Laroussi, be completed at some point over the next 10 years.

This is slow architecture, and it might just be, in its own small way, a critique of the relentless and almost imperceptible speed at which our modern age moves.

It was while visiting an exhibition of Bechara’s paintings in Rio De Janeiro that Laroussi became fascinated by the artist’s use of ordinary, everyday materials to create beautiful paintings that, over time, rust and decay. He became inspired by how it was possible to “use something that was a problem” like rust “and turn it into a beautiful solution”.

Time, decay and ageing all became important ideas that drove the design process. “Perhaps we could use those things to make something that could become beautiful,” says Laroussi. The challenge of creating something that would not just last the 20-year timeline but also age gracefully for many years more in the stunning Kerry landscape led Urban Agency to study the rural architectural forms and materials of the surrounding area.

“We researched a lot of existing cottages and studied the simple materials like the rusty corrugated roofs and stone walls, or the early forms of Celtic inhabitation where dwellings were made out of one material,” says Laroussi. “The ingredients started to become quite logical, so we collected all of these ingredients and, with humility, we tried to use those buildings to inspire ourselves.”

Taking the simple and rudimentary materials of the surrounding buildings, Urban Agency needed to find a material that, like Bechara’s paintings, would age and decay over time, becoming a worthy part of the beautiful surrounding landscape. The answer, which may not sound like the most natural of materials, was concrete.

Buildings are never like you see them in photographs, all pristine and white – they get old and decay

What interested Laroussi was that concrete – which when broken down into its raw components is actually quite a natural material – is hardwearing, can be shaped into interesting forms, and can last for a long time. But more importantly, concrete could capture something of the process of time that they were looking for because it stains. The challenge was how, in the exposed and often harsh Kerry landscape, could they design the concrete to stain and decay with grace? The answer was to be found in a domestic garden centre.

Mixing coloured pigment into concrete before it is poured is a common technique, but it can also be prohibitively expensive. After much experimentation Urban Agency discovered that iron-oxide powder, typically used to boost iron levels in soil, could be mixed with water and used like paint on the surface of concrete. The result gives the concrete the appearance of rusting and, when cast in situ using vertical timber boards, Laroussi hopes that as rain runs down the grain of the wood the concrete will stain gracefully over time. “Buildings are never like you see them in photographs, all pristine and white – they get old and decay.” This for Laroussi is something that can, when designed in a considered way, be celebrated.

Ten years in the making, phase one is now complete. Housing a bedroom, connected to the existing cottage by a glazed link, the concrete monolith reflects the simple gable form of the existing cottage, with the rustic, textured exterior offset by the smooth minimal white walls of the interior. At some point in the next 10 years, using the same materials and similar form, phase two will emerge.

The Lost Cottage is  available to rent on uniquehomestays.com