Tiger-era D4 penthouse back with facelift and €300,000 price hike 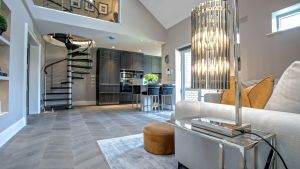 The 16-unit block was built to a design by McCrossan O’Rourke Manning that includes three penthouses. Its crowning jewel, 16 Embassy Court, a 237sq m (2,554sq ft) penthouse, sold for €2.45 million in 2016, while number 14, ranked by online interiors platform Houzz.com as one of the top 100 penthouses in the world in 2014, sold for €2 million in the same year.

Number 15, the development’s last remaining penthouse, had been placed on the market last August, seeking €1.795 million with an option to have it refurbished by decor firm Phoenix Interiors, for an extra €70,000.

Now it has been reconfigured and fully refurbished for sale. The building works included changing the location of the kitchen, upgrading the plumbing and bathrooms and installing a remote-access, high-spec, Lutron lighting system.

The penthouse, which comes with two secure car parking spaces and a 15sq m storage lock-up, extends to 175sq m/1882sq ft, and is now seeking €2.1 million through agent Savills.

The new kitchen is accessed from the main hall via pocket doors that disappear into the walls to create a slick opening. The u-shaped kitchen is finished with blackened ash units, and lined in birch ply, a custom design by Edenderry-based Walter Byrne & Sons.

A small breakfast bar leads through to the family room, a dramatic space with double-height ceilings and a spiral staircase leading up to a mezzanine and double doors out to a southwest-facing balcony.

A sitting room, complete with bar, occupies the mezzanine where the original open railings have been replaced with floor-to-ceiling glass panes making it a discrete space in its own right.

The formal dining room has replaced the original kitchen and is accessed through another set of pocket doors. It’s a lovely warm space that could also double as a home office.

The three double bedrooms are set on the north side of the property. Banks of floor-to-ceiling wardrobes with double-height hanging space and revolving shoe racks lead to the main bedroom and its roomy shower en suite.