The sinister smell of a septic tank gone very wrong 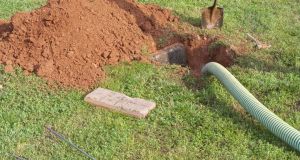 Eventually the lavatory bowl started to back up and I had to act. I got the shovel and pick and started digging. Photograph: Getty

We were having breakfast in the shade of the cherry tree. The sun shone brightly from a clear sky and the green hills rolled gently away to the blue horizon. Elderflower blossomed in the roadside banks. Birds squabbled in the hedgerows. A soft breeze rose, the leaves above our head rustled and I caught a faint odour of slurry from distant fields. I shrugged – after a dozen years in this far corner of Wicklow this is no longer an unpleasant aroma. Then my nostrils recoiled from the sharp tang of a more sinister smell. My eye landed on the source: just by the digger parked in the middle of our acre. I remembered that our septic tank was banjaxed and I choked on my croissant.

Not being on the mains we were blithely unaffected by the whole water charges fiasco but in rural Ireland we still pay. We have our own well, which sounds idyllic but isn’t. Some people no doubt have sweet, fresh water but our hill is packed with iron and manganese and the soil is thick with the accumulated manure of generations of cattle and sheep. We have a filtration system to remove E.coli and orange sludge. It mostly works – apart from when the pump in the garage freezes in icy weather – but my ingenious wife discovered that hanging a light bulb just above the pump provided sufficient warmth to keep its temperature just above zero. Getting fresh water into the house occasionally provides satisfying anecdotes to swap with neighbours but getting waste and sewage out of the house causes bitter tears that nobody wants to share.

The septic tank has troubled us before. It is a deep concrete walled pit buried about 25 yards down the field from the house and is fed by a pipe sloping gently downhill bearing effluent away. That is the theory – in practice it has got clogged numerous times. Fortunately for me, in our early years here, this mostly seemed to happen when I was away and my wife had to deal with it. She would call Farmer Friend who would pitch up with the appropriate rods to unblock things. His guess was that the pipe had caved in to create a severe bottleneck a yard or so from the tank – it would only get worse with the passing months and needed dealing with properly. The months duly passed and whenever he asked “Have you not dealt with that septic tank yet?” I would shrug and think of butterflies.

Eventually the lavatory bowl started to back up and I had to act. I got the shovel and pick and started digging. It took most of a day of back breaking toil to get down through stones and rocks and thick clay. There was no caved-in bit anywhere – the pipe should have been laid at a slight but consistent downhill gradient so that at bottom it connected with the mouth of the septic tank. However it reached this depth about five feet from the end – from there it curved down before twisting up again to join the tank. It was pinched almost closed and the final flow was against gravity, against nature and against all principles of decent plumbing. I was sitting in the bottom of the hole, cursing and whinging when Farmer Friend looked down at me. I hoped he would help me or say something like “Great work! Leave the rest now and the fairies will finish the job.” But he didn’t. He just nodded grimly and said, “Well, you’re over the worst.”

He was wrong and I still shudder to remember those distasteful hours: whining whilst removing the bent piping and fixing a new, straight bit; and weeping as residual sewage washed around my wellied feet. Telling myself that the faecal matter I was eying at least belonged to people I loved was of little comfort and I swore I would never do this job again.

I haven’t had to – the repaired pipe has held fast – the new problem has been with the percolation area. It turns out we didn’t really have one. Once a tank has done its job, there is nonetheless remaining liquid which needs to exit via an overflow outlet and into a drainage pit packed with pebbles. The recently passed wet winter and saturated spring has raised the water table countrywide. Our acre was sodden but the patch below the septic tank became a marsh with suspiciously thick grass. A neighbour with a mini-digger excavated the area and once again I found myself in a hole shovelling dubious smelling sludge. But this time I didn’t cry because it soon became clear that the job was beyond me. Even the mini digger was unequal to the task. We have had to install a proper system involving very deep digging, many yards of pipe and many tonnes of drainage stone. If we ever have septic tank problems again, we’re moving back to the city where I will walk dog turd smeared pavements with equanimity.