Back to the future home in Dalkey with €500k price drop 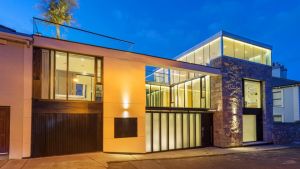 Courtyard typology, one of the most primeval classifications in architecture dating as far back as 6500BC in China, was the inspiration for Graymoor – a striking contemporary house directly beside Loreto Abbey School in Dalkey.

“I call it the sundial house,” says architect Gavin Buggy who describes this project “as the most interesting of my career”.

“We built a 3D model of the proposed house on a huge scale and then ran a sun path analysis to ensure the courtyards [of which there are three plus a roof terrace] were in the correct place.”

The idea behind courtyard typology is to maximise residents’ daylight requirements through the course of the day.

Graymoor was granted planning permission in 2005, but its South African owner, like so many others at the time, fell foul of the recession and lost control of the property mid-construction. It then sat idle for almost a decade becoming a familiar local eyesore.

In 2013, David Sorohan purchased the unfinished property from the receiver for €550,000 and set about completing the interiors.

There were quite a few sagas during the early construction for architect Buggy: “We had to excavate down through Dalkey granite and install a borehole to a depth of 200 metres. In the end we had to use a company that drill oil wells. It was such a complex dig that no other Irish company would touch it, and the pipes were laid out around the gardens of the school next door because they were so long. We also installed a tightrope wire to the adjacent house to ensure we got the height of the building exact.”

The deep dig ultimately delivered geothermal heating via the extraction of heat from the rocks below, providing almost free energy as a result. Planning was also granted for a wind turbine on the roof – which would give additional free energy but this was never completed due to budget restraints.

“The windows alone cost €300,000 and were built by the same company who completed Terminal Five in Heathrow Airport – despite being clear they act like a pair of good sunglasses cutting up to 60 per cent of UV radiation,” says Buggy.

Stepping into the courtyard just inside the front door, there is a distinct sense of “lights, camera, action”. Automatically, the blinds – of which there are at least 30, retract into their hidden recesses, the curtains open, and mood lighting and music switch on to create an immediate ambience. To describe the technology within as “state of the art” is an understatement – an electronic door in the kitchen, closes over at the touch of an elbow, should one’s hands be covered in flour or fish guts.

“The client had very unique requirements and was quite the optimist regarding Irish weather,” says Buggy, which goes to explain why an entire wall in the dining area slides back to create a seamless divide into the central courtyard. In addition the large roof terrace is served by a second diningroom on the top floor of this three-storey house which extends to 300sq m (3,230sq ft). There is a further 129sq m (1,388sq ft) of external space in the courtyards and terrace.

The design palette is of oak, glass, granite and marble – which is bookmatched for symmetry. Basalt was used on the roof terrace which was reinforced with steel to accommodate the weight of a hot tub.

Simple but effective features include hidden sliding doors which allow the entire house to be open plan when entertaining, and what looks like a wall of storage is actually the entrance to an internal car port – complete with stone carpeting.

“We decided to sink the livingroom at garden level – to give the effect of a man cave, and the one on the top floor is all glass to create an observatory theme.”

The property feels brand new despite its origins in 2005, and the fittings are all recent. It has a quite a masculine feel, and the roof terrace can, thanks to all that steel and basalt, take a colossal weight, so it would benefit from further plantings.

In total the property has two livingrooms, two diningrooms, a library, car port and four bedrooms. As far as the quality of the interiors is concerned, the solid oak-lined cloakroom says it all about the standard of the fit-out.

Its location just beside Loreto School – the newer part of which blocks some of the sea views, will either clinch the deal for a family with growing children or deter a buyer who doesn’t fancy being beside school gates.

The property came quietly to the market in December 2017 seeking €3.5 million, and has now reduced its price to €2.95 million through Savills.